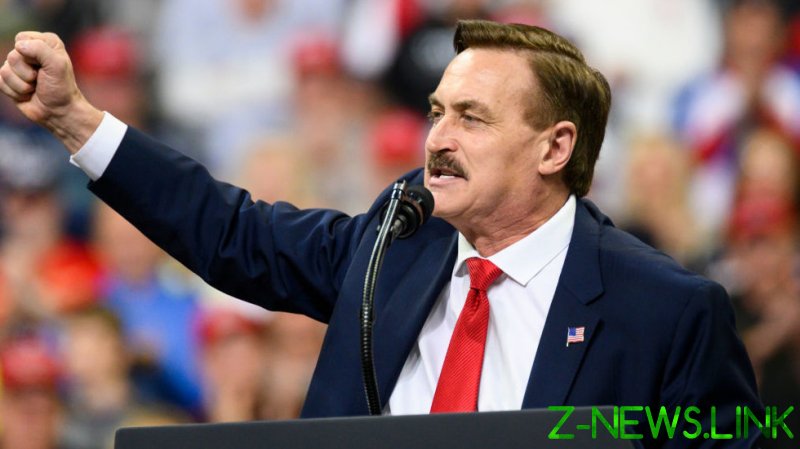 MyPillow CEO Mike Lindell, an outspoken conservative, pledged on Saturday to provide pillows to the truckers protesting against coronavirus restrictions in Canada. Lindell said he has a personal grudge against Canadian Prime Minister Justin Trudeau, and urged the truckers not to “compromise” until they win “all our freedoms” back.

“All of our employees are busy making pillows right now for the truckers in Canada. We’re going to try and get them through. I’m not going to say what day or, you know, there will be obstructionists,” Lindell told Right Side Broadcasting Network on Saturday.

However, Lindell’s shipment of pillows may be impeded by the protesters themselves. As of Sunday morning, traffic remains at a standstill on the Ambassador Bridge linking Detroit in the US state of Michigan with Windsor in the Canadian province of Ontario. The bridge accounts for around a quarter of all US-Canada trade, and although police spent much of Saturday moving groups of protesters away from the area, the bridge itself remains blockaded by trucks. Police are beginning to tow trucks, however.

Lindell said that his company has a plant in Canada, but described how in the wake of the 2020 US presidential election, Canadian companies dropped his products as he publicly denounced Joe Biden’s victory as fraudulent. Lindell’s claims have seen him banned from social media, yet the MyPillow CEO continues to host talks and events claiming to have evidence the election was “stolen” from Donald Trump. Numerous lawsuits by Trump’s allies have failed to substantiate these claims.

“When I was canceled in the United States, Canada companies canceled me too…so our production went way down a year ago,” he explained. “I got a little problem with Trudeau, let me tell you.”

“We’re gonna get these brave truckers, and it’s going on around the world now. It’s amazing. We’re winning,” a breathless Lindell continued to RSBN. “I encourage all the truckers don’t give up and say ‘Okay, we’ll compromise halfway.’ No. We want all our freedoms.”

The truckers of the Freedom Convoy have been parked in the Canadian capital, Ottawa for two weeks now. Originally convened to protest a requirement that truckers be vaccinated to return to Canada from the US, the convoy has since demanded the lifting of all coronavirus restrictions, and some within it are calling for the resignation of Trudeau. Drawing inspiration from the Canadian truckers, similar ‘convoy’ protests have taken place in Australia, New Zealand, and Europe.