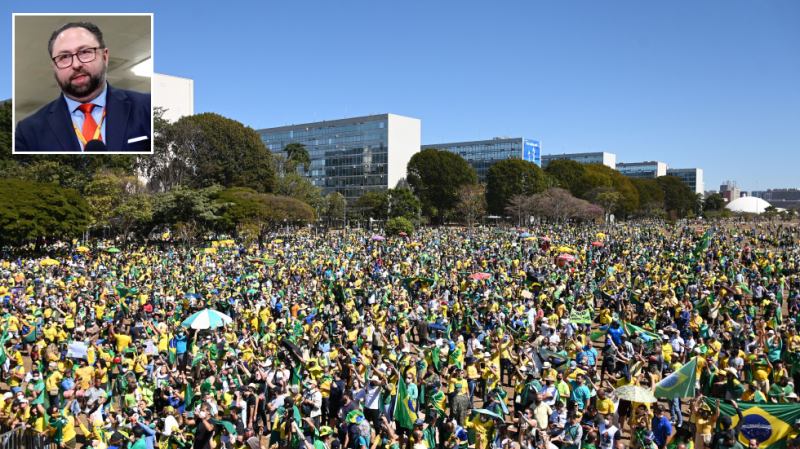 Miller and several other Americans were in Brazil for the Conservative Political Action Conference (CPAC) that took place over the weekend, and met with Bolsonaro. On Tuesday morning, they were stopped by police at the Brasilia airport and prevented from leaving the country.

According to Brazilian media, the delegation was not arrested, strictly speaking. Federal police detained them in connection with investigation 4874, which is looking into “organization of anti-democratic acts” in Brazil. The probe is headed by Alexandre de Moraes, a judge of the Supreme Federal Court (Supremo Tribunal Federal, STF) who has been investigating Bolsonaro and his sons for alleged corruption.

In a statement posted on Gettr, Miller said that he and his associates were questioned “for three hours” at the airport.

“We were not accused of any wrongdoing, and told only that they ‘wanted to talk.’ We informed them that we had nothing to say and were eventually released to fly back to the US,” he wrote.

Just after noon Eastern time, Miller’s associate Matthew Tyrmand tweeted that the delegation was “safe and in our plane taxiing back to the USA. We live to fight another day. Thank God. And thank you all for the well wishes.”

The incident came on Brazil’s independence day, as crowds of Bolsonaro supporters held massive rallies across the country in support of the president. Meanwhile, Bolsonaro’s domestic and foreign critics rang alarm bells about “anti-democratic” threats. Some Democrat activists in the US have even drawn comparisons to what they called the January 6 “insurrection” at the US Capitol.

Bolsonaro’s critics insist that the rallies are a first step “toward some kind of coup” and that “large parts of the military police and even the military are willing to use violence to keep him in power, along with large bands of armed fanatics still loyal to him,” according to Glenn Greenwald, an American journalist who lives in Brazil. He said this was “very speculative.”

Greenwald added that over the past two years, “a Supreme Court justice has been ordering pro-Bolsonaro bloggers, activists, and politicians imprisoned or kicked off the internet, fueling much rage.” Some of the people banned “were clearly plotting coups but other cases raised censorship concerns,” he added.

“There is no climate of anti-democratic sentiments in Brazil,” insisted Bolsonaro’s adviser Filipe Martins. “Millions are peacefully demonstrating to support democracy, rule of law and basic liberties that are being undermined by authorities (outside the executive branch) who abuse power to intimidate and censor their critics.”

Brazil has been in the grip of political turmoil since 2016, when President Dilma Roussef was impeached over allegations of corruption. Her predecessor, Luiz Inácio Lula da Silva, had been disqualified from running in the 2018 election on account of his own corruption conviction – which has since been nullified. Bolsonaro, a right-wing populist, emerged as the favorite in his absence, and swept the polls with 55% of the vote after surviving an assassination attempt.

Bolsonaro’s approval rating took a dive in 2020 amid the Covid-19 pandemic, threatening his chances of re-election in 2022. The president recently raised concerns that the country’s electronic voting system was vulnerable to fraud, advocating for paper ballots, but was rebuffed by both the legislature and the Supreme Court.