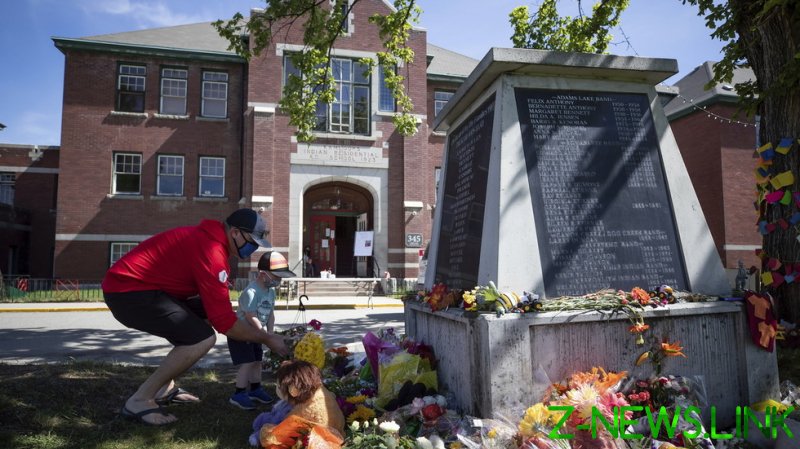 Since the horrifying news broke this week that the bodies of 215 children have been found at Kamloops Residential School in the Canadian province of British Columbia, there have been increasing calls for ‘greater accountability’ and a nationwide search for more graves.

Between 1831 and 1996, more than 150,000 indigenous children were forcibly removed from their homes, in some cases ripped from the arms of their parents. Many of these children ultimately died of abuse and neglect, to which this latest discovery attests. It’s a horrifying chapter in Canadian history, and the authorities would like us to believe it is just that – history. But it’s not.

The separation of indigenous children from their parents is still happening at an alarming rate. Despite comprising 7% of the population of Canadian children, indigenous children make up 52% of children in care. Yet, when news broke of the gruesome discovery at the Kamloops school, a predictable narrative began to emerge: however indirectly, all indigenous people are essentially traumatised by experiences in these schools. What is more, this trauma ultimately explains the many problems faced by indigenous communities. As one respondent put it, indigenous people have “ongoing issues in our communities that are a direct result of these schools,” and the failure to recognise this ensures “that new generations are continuing to suffer.”

Yet it is exactly this narrative that is perpetuating the problem, inviting ever-greater surveillance of indigenous families and increasing the number of children who are removed from their homes. It is so common a story that it has come to acquire an air of common sense, even among indigenous people themselves. It goes like this: Because of the legacy of colonialism, residential schools, and later child welfare removals from the 1960s to 1980s, indigenous mothers, who were not mothered themselves, have become unable to mother their own children.

In this way, the wicked issues faced by indigenous people have come to be understood through pop psychological theories of emotional trauma and outdated ‘cyclic’ theories of social problems. As one young indigenous woman put it, “We’re still experiencing the effects of the residential school from our parents and grandparents. We’re all damaged, and we’ll pass it on to our children, so it will never end.”

So engrained is the belief that the emotional wellbeing of indigenous parents presents a risk to the next generation that the Canadian province of British Columbia recently came under fire for issuing ‘birth alerts’ to child welfare authorities as soon as an ‘at-risk’ child was born – a large proportion of which were indigenous children. Just being indigenous has come to be thought of as a ‘risk’ to the next generation.

But the belief that indigenous women were incapable of taking care of children and could not possibly raise the next generation of good, well-mannered, liberal citizens was precisely the rationale that led to their removal to residential schools in the first place. Now, all that has changed – through the language of ‘trauma’ – is that the notion that indigenous parents are bad parents has acquired a therapeutic edge. What is more, it has been placed at the heart of a wide network of social problems.

It is worthwhile to remember that while large numbers of children were taken to residential schools, not everyone was. And not everyone views themselves as irreparably scarred from the experience. Yet this narrative of the ‘traumatised’ indigenous victim has become so prevalent that one school’s homework assignment to find ‘positive stories’ of residential schools was met with uproar. As a Canadian indigenous person myself, who grew up hearing stories of the horrors of residential schools, I too was outraged when I first heard about the misguided school assignment. But I’ve since come to realise that the constant invitation to expound atrocity tales, the constant expansion of victimhood, the tendency to see every single indigenous person as traumatised, has a darker edge.

Only one narrative is allowed, and indeed widely invited – the atrocity tale, that lives and indeed whole successive generations are forever marked, and even utterly ruined, at the hands of the colonising state. Yet, this narrative is not the only one that indigenous people would like to articulate. But it’s the only one most people want to hear.

The remoteness of communities, poverty, lack of opportunity – all well-known precursors to social issues and experienced by Canadian indigenous people in greater proportions – are pushed off the agenda. Everything is caused, in some vague way, by ‘trauma’. As indigenous academic Dian Million says of this outlook, “While the crisis is the ongoing effects of poverty and the continuing dissolution in communities in extreme marginalization from mainstream ‘freedoms,’ [Indigenous people] are posed with the need to ‘heal.’”

It may not be cynical to say that this is by design. Representatives of the Canadian government are quick to self-flagellate. Atrocity tales offer endless photo ops for officials like Prime Minister Justin Trudeau to wipe tears from their eyes.

But they also allow the Canadian government to draw a line under the past and say, “This was the bad old government. The government of today is enlightened.” When they act now, they truly do act on the basis of kindness and with the best interests of indigenous people at their heart.

But this is not the case. There is demonstrable continuity between the actions of past governments and those of the present. In their racist, paternalistic way, past governments had justified their actions on the basis of saving Indians from themselves. This is still the case today.