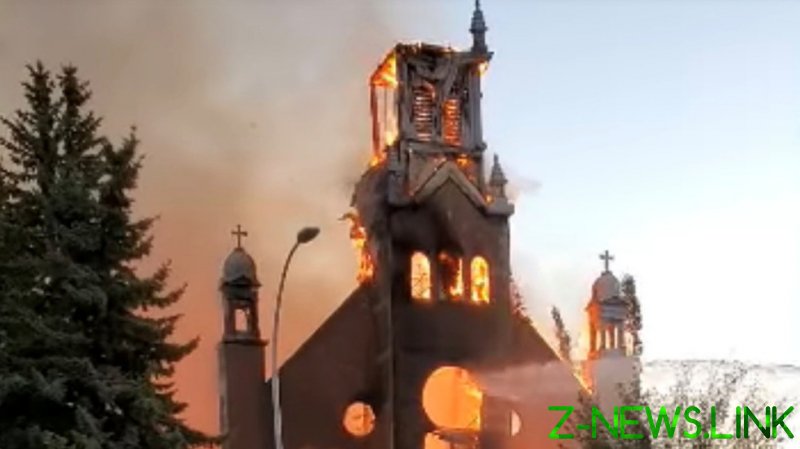 “It is unacceptable and wrong that acts of vandalism and arson are being seen across the country, including against Catholic churches,” Trudeau said on Friday, less than 24 hours after statues of Queen Elizabeth II and Queen Victoria were torn down by protesters in Winnipeg without any interference by police.

The latest acts of vandalism followed a spree of attacks on Catholic churches built on First Nation lands. At least seven churches have caught fire in recent weeks, since the grim discovery of more than 1,100 unmarked graves at sites where Catholic-run residential schools used to operate.

Tensions ran especially high on Canada Day, celebrated on Thursday, and at least 10 Calgary churches were defaced with red spray-paint, some marked with the words “we were children” and “our lives matter.”

Trudeau said that while he understands the grievances of indigenous peoples who are taking out their anger at the places of worship, he argued the attacks were  “depriving people who are in need of grieving and healing and mourning places.” He called for reconciliation between indingenous and non-indigenous Canadians instead, admitting years might pass before the wound is healed.

“What took generations and centuries to break in terms of the relationship between indigenous and non-indigenous Canadians, it will take more than just a few years to fix it all,” the PM went on.

While the Candian government now acknowledges the widespread boarding school abuses, the Catholic church has never formally apologized for what many indigenous people see as acts of cultural and physical genocide.

Amid growing calls from indigenous activists as well as from Trudeau himself for the Vatican to acknowledge its role in the ill-treatment of native children, Pope Francis agreed to meet with the representatives of the First Nations leaders later this year.

So far, no apology has been forthcoming, however, and the national chief of the Assembly of First Nations Perry Bellegarde said on Wednesday that his group was given no “guarantee” that the visit would result in “any kind of apology” or that Francis would travel to Canada to address indigenous people himself, as suggested by Trudeau.

More than half of Canada’s residential schools between 1831 and 1996 were run by the Catholic church.