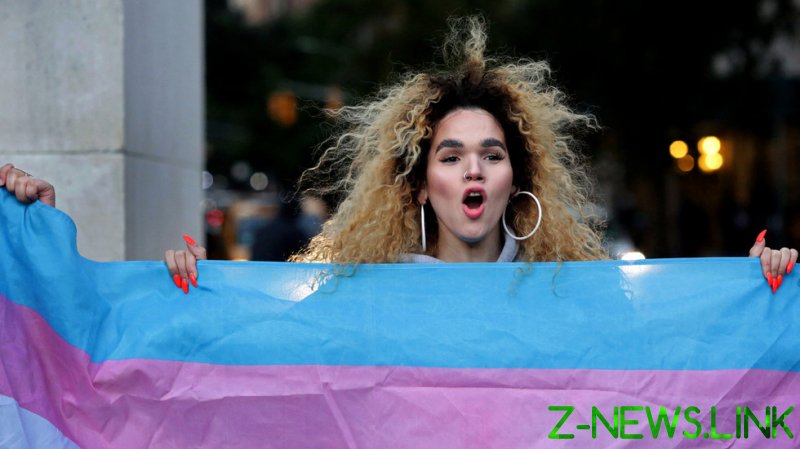 The public library in Halifax, Nova Scotia had come under pressure for stocking Shrier’s book. Transgender campaigners had made the usual hyperbolic accusations that it presented a “safety issue”, one claiming, “the impact of this book on, like, even one kid is potentially their life”. Utter nonsense, of course, but those campaigners will stoop very low to get their own way.

Last week, the library announced it was not going to be removing the book from its shelves. In a statement it said, “Public libraries exist to provide equal access to resources for everyone and support individuals’ freedom to seek information and form their own opinions. When we act to suppress access, we engage in censorship.”

Perhaps with a view to the inevitable outrage that it knew would follow, it quickly re-committed itself to support trans people and the “broader LGBTQ2S+ community” before suggesting not one but 18 books that take an approach that is different from Shrier’s.

However, nothing short of total capitulation is ever good enough for the transgender thought police. Halifax Pride promptly announced its decision to end its partnership with the Halifax Public Library, including events planned for the 2021 festival. Let them go, would be my advice to the library. The trans community needs far better representation than Halifax Pride and their assertion that Shrier’s book could possibly put “local trans youth in immediate harm.” It is Shrier who is calling out the real and tangible threat to transgender-identified youth. They are being captivated by a dangerous ideology that pushes them into unnecessary medical treatment that could leave them sterile and medicated for life.

Sadly, we have got far too used to the petulant moaning of groups such as Halifax Pride. It doesn’t help transgender people like me, but the damage may be limited if we pay no attention to it. But that’s harder when the Canadian state broadcaster CBC publishes a news report that reads more like an op-ed. It started with the pull quote “This book is definitely debating the existence of trans people”, and quoted Halifax Pride and the author of one of two petitions that had called for the book’s removal. In a ludicrous non-attempt to balance the piece, the report quoted a professor of health promotion, “whose research includes LGBTQ health and gender”. She saw the book as harmful “junk science” that should be openly discussed, but not pulled from the library.

“I don’t know that taking the book out of the collection is necessarily going to resolve the bigger problem, which is transphobia and trans hatred.”

CBC might not have given Abigail Shrier a right of reply, but RT.com was keen to hear from her. Shrier told me, “My book does nothing more than point out the medical risks of hasty transition for teen girls. The notion that that makes anyone feel unsafe is a lie that the activists are using, very effectively, to silence all debate over the medical protocols of transition. I don’t know what’s more disgraceful, the attempt to suppress a book, or all the people who have fallen for it. But I’m grateful to the Halifax Library for standing up to this madness.”

But the madness runs deeper than local issues in Halifax, Nova Scotia. CBC appears to have been captured. It cited author Tom Ryan, who said he now plans to cancel his upcoming library-sponsored presentation out of concern for the LGBTQ teens he writes about. However, in an atrocious failure of editorial judgment, the original piece illustrated Ryan’s quote with two of his tweets. In them, he likened Shrier’s concern for transgender-identified girls with the anti-Semitic writings of David Duke, the former grand wizard of the Ku Klux Klan. Without criticism or comment, CBC embedded two tweets in which Ryan had written the following:

“A quick search tells me that Halifax Public Library does not carry ‘Jewish Supremacism: My Awakening on the Jewish Question’ by David Duke. Is it censorship of HPL so [sic] choose not to carry this book? Would people crawl out of the woodwork to defend the library if they did carry Duke’s book? If you answered no, ask yourself why so many people are quick to defend this book. It’s not about free speech – it’s about granting transphobia a veneer of respectability.” 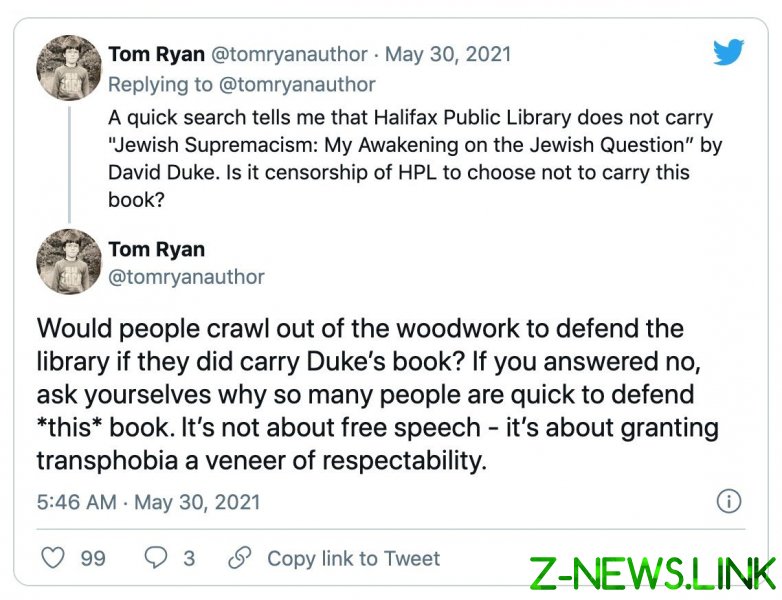 Ryan later withdrew those appalling remarks – and they also disappeared from the CBC report – but what was a state broadcaster thinking when it selected them for publication? It’s far too easy for libellous accusations to be propagated on social media, but that doesn’t excuse professionals who should know better than to repeat them. To link Shrier to Duke is not only potentially defamatory, it misleads the Canadian public. Either CBC is hopelessly naïve and does not know what it is doing, or this was a deliberate attempt to discredit Shrier’s book by the most scurrilous tactics imaginable.

I’ve read Shrier’s book. Last year, RT.com published my review. ‘Irreversible Damage’ is neither transphobic nor anti-trans, whatever those terms might mean, and it is not “definitely debating the existence of trans people.” It is controversial only because some people seem determined to suppress it at all costs.

If Shrier is right – and I think she is – we are witnessing an appalling failure of safeguarding, which is leading to the systematic abuse of vulnerable girls. Her claims need to be investigated, and therefore her book needs to be read. If CBC is trying to actively suppress this book, Canada has a very serious problem indeed.