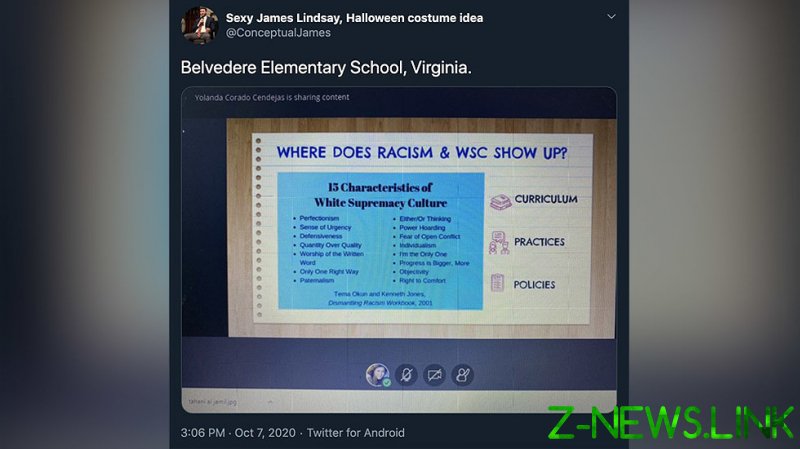 The presentation slide, shared on Twitter by author James Lindsay on Wednesday, showed a list of 15 traits by which the young students could identify “white supremacy culture.” It appeared to be a rough summary of the 2001 ‘Dismantling Racism Workbook’ by authors Tema Okun and Kenneth Jones.

Lindsay claimed the lesson was being taught to kids at the Belvedere Elementary School in Virginia – and the name of the teacher appearing on the slide also matches the name of a teacher at that school.

The list features seemingly inoffensive concepts like “fear of open conflict” and “individualism” as characteristics of white supremacy culture – but the addition of arguably positive traits like “perfectionism” and “objectivity” raised the most eyebrows.

The slide prompted uproar on Twitter as many took issue with the mere idea of introducing the subject of white supremacy to elementary-age (6-11 years old) kids – and using such non-specific terminology to define it. Some said the lesson itself was racist.

On the other hand, some were simply baffled by the designation of seemingly innocuous traits as being linked to white supremacy – ideas that elementary school children were unlikely to be able to grasp.

“I can think of at least half a dozen non-Western cultures where some or all of those 15 traits are valued,” tweeted blockchain personality Charles Hoskinson.

Supposed anti-racism initiatives in education seem to backfire more often than not in recent months. Just this week, it was revealed that the University of Kentucky had been subjecting its incoming residents to segregated racial sensitivity training sessions, where white people were told to identify racist traits within themselves.