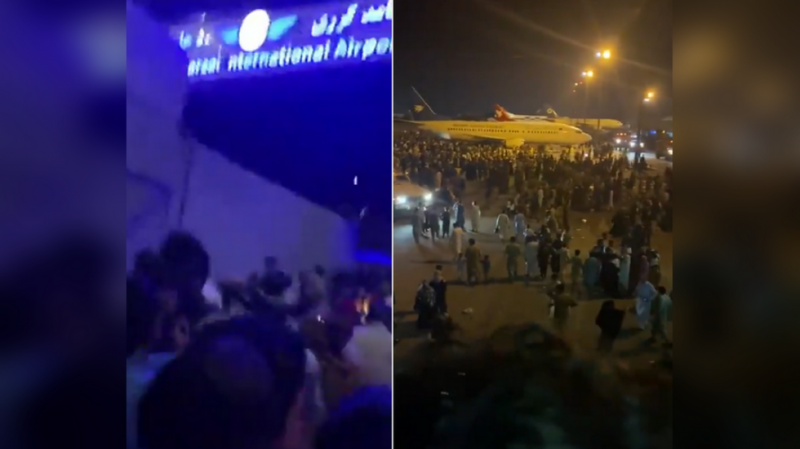 The Taliban began entering Kabul on Sunday as it reached the ultimate destination of its country-wide offensive that has gained momentum in the past two weeks. The encirclement of the city prompted the collapse of the government, with the country’s President Ashraf Ghani announcing his resignation and fleeing the country.

The impending full takeover by the Taliban has caused full-blown traffic collapse across the capital. Footage circulating online shows the city’s street packed with cars, as people tried to either reach their homes – or the city’s airport, the last option remaining to escape the Taliban rule.

As the civilian traffic waned by the evening, military vehicles of the Taliban began rolling down the streets of Kabul as the militants poured into the city en-masse. The group has already taken over multiple key locations, including the presidential palace.

Those desperate to flee from the Taliban were seen heading towards the airport on foot while hauling their belongings.

A large group of those seeking to leave the country was filmed by the airport’s entrance as several shots, apparently fired by airport security to prevent the stampede, rang out in the background.

The gunfire at the airport resulted in the suspension of commercial flights, Reuters reported, citing anonymous senior US military officials. From that moment on, the evacuations proceeded only via military aircraft, they said.

People seeking to be evacuated were seen boarding a C-17 Globemaster heavy cargo military plane, presumably belonging to the US Air Force. The video was apparently shot in the military part of the airport, with the evacuation process appearing to be organized.

The civilian part of the facility, however, has been plunged into a complete chaos. Hundreds of people were seen roaming the airfield trying to board commercial flights.

Armored trucks were pictured rolling around the tarmac, cruising through the panicked crowds. Later in the day, US servicemen were seen establishing a security perimeter around the airport.

It was not immediately clear whether they secured the whole facility.