Home / WORLD / Trade with China is key to Europe’s economic recovery, so why is the EU harming that trade with pointless political posturing?

Trade with China is key to Europe’s economic recovery, so why is the EU harming that trade with pointless political posturing? 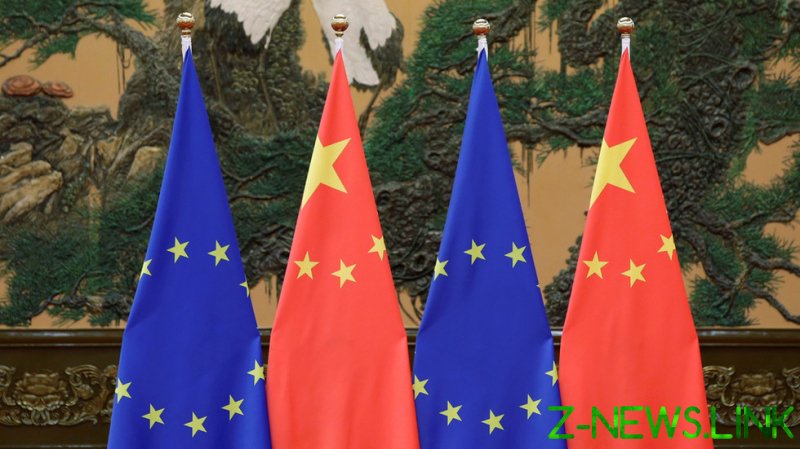 The move, which Commissioner for the Internal Market Thierry Breton has claimed would ensure that “no one can undermine the level playing field and Europe’s competitiveness with distortive foreign subsidies,” is aimed at China, which recently has become the EU’s largest trading partner and is the only economy to experience growth amid the ravages of Covid-19 in 2020.

That growth has already been helping mutual economic recovery through bilateral trade worth 586 billion euros, spurring a rise in Chinese demand for European luxury goods and the EU’s increased purchases of Chinese medical equipment and electronics. Yet the EU is bent on politicizing its trade with China via damaging protectionism rather than taking full advantage of trade’s opportunities.

The Commission’s announcement on internal-market restrictions came hot on the heels of a statement delivered by Valdis Dombrovskis, Executive Vice President of the European Commission for An Economy that Works for People, that ratification of a landmark draft EU-China investment deal completed in December 2020 was being “suspended.” This was over Chinese sanctions leveled against the EU in retaliation for EU sanctions against China over alleged human-rights abuses in Xinjiang against Muslim Uighurs in internment camps, which Beijing has repeatedly denied.

Chinese officials instead argue that their policy in Xinjiang has been to round up those radical Uighurs who pose a threat to the population like those that have erupted in nearby Pakistan and Afghanistan.  But to Dombrovskis and the rest of the EU governing elite, this political situation means “the environment is not conducive for ratification of the [investment] agreement,” because it “cannot be separated from the evolving dynamics of the wider EU-China relationship.”

Little surprise that the EU is again holding trade with a third country hostage to political demands that have nothing to do with trade.  This attitude flies in the face of the economic interdependence between the two sides that needs to keep deepening if Europe is to recover as quickly as it can from the economic stagnation brought on by Covid-19.

While Europe prevaricates over protectionist politics that only delay that recovery, China is genuinely doing its part to open up to foreign investment unbound by political matters.  The country has liberalized its own foreign-investment law, steadily reduced the number of domestic markets restricted from foreign entry in its “negative list,” and established economic incentives for foreign investment in areas including Xinjiang, Hong Kong, and Chongqing.  These reforms helped China overtake the US in 2020 as the world’s largest recipient of foreign-investment inflows.

The draft EU-China agreement could unleash the advantages of this liberalized investment market.  Putting it on ice because of politicized sanctions, however, shows a genuine lack of reciprocity towards a country that is rigorously implementing its promises on foreign-investment openness and buying over 200 billion euros’ worth of EU goods annually.

The EU’s sanctions mania over Xinjiang, in tandem with its apparent aim of restricting Chinese investment in Europe, is therefore particularly spiteful given that Xinjiang itself is one among several regions the Chinese have opened up to foreign investors.  Disturbingly, major European brands including H&M and Burberry have joined the fray of politicization, boycotting Chinese cotton sourced in Xinjiang over wider ethical concerns cited in the EU sanctions, which has prompted boycotts of their products in China.  Xinjiang government spokesman Xu Guixiang has warned of the rising danger of the EU’s reckless actions, labeling the leaders carrying them out as “enthusiastic about political manipulation and the abuse of sanctions, to a level that is hysterical.”

The EU’s politicized hysteria over trade with China runs deep, and its other alarming effect is to encourage hypocrisy in EU commercial relations with the country.  China’s bid to gain Market Economy Status in its trade with the EU under the rules of the World Trade Organization (WTO), which would make current EU protectionist tariffs against certain Chinese goods illegal, was rebuffed in June 2020.  The decision means EU countries can continue to use their political aversion to China’s Communist system and its allegedly heavy state subsidies for Chinese exporters as justifications for levying high anti-dumping taxes on many types of goods from China – goods that receive easier treatment when exported by Western countries that enjoy Market Economy Status.  That conduct is ironic, because several major European corporations with international reach have benefited from heavy state subsidies.  A 2018 WTO ruling found that Germany, France, Spain, and Britain had given $22 billion in government aid to airplane manufacturer Airbus since 2004 and that those subsidies were illegal.

Back in 2009, a high-profile disclosure of German-government “agricultural” subsidies revealed 5.4 billion euros of state aid in this sector alone, much of it given to corporate entities not even involved in agriculture, including major airline Lufthansa, which received 2.5 million euros in annual export subsidies for serving its passengers dairy products.

Germany, ostensibly the leader of the EU due to having the largest economy in the bloc, has persistently kept a current-account surplus of over 6% of GDP for every year but one since 2011, meaning that it exports far more than it imports.  This imbalance violates EU rules that urge Member States to restrict external surpluses to no more than 6% of GDP – in essence, a recommendation that those states which can comfortably buy more exports from their European neighbors should do so.  By contrast, China’s current-account surplus has never exceeded 2.8% of GDP in the same time period.

That Germany regularly refuses to conduct more equitable trade with its neighbors – and hence bolster intra-EU trade prosperity – is all the more worrying as Germany and its EU peers seem to carry this narrow-mindedness into the realm of international trade.  Importing more from EU neighbors while also deepening trade with China are measures that could and should go hand in hand to enrich EU economies and speed their recovery.  That the EU’s leading national economy apparently lacks the will to do either fully is setting a terrible example for the rest of the bloc.

German Chancellor Angela Merkel officially endorsed the draft EU-China investment deal as promising “mutually beneficial” trade, in an April virtual meeting with Chinese Premier Li Keqiang, but at that same meeting she called for a human-rights dialogue, having already indicated her support for the EU’s Xinjiang sanctions and told a German industry association that China’s economic system“has a pronounced state-owned, and sometimes repressive, character.”  If Germany would instead take steps to end the “repressive” effects of its current-account surplus on intra-EU trade and stop letting politics intrude on commercial affairs abroad, it could swiftly achieve the reciprocally profitable EU-China trade that China is already helping realize.

Speaking at a joint summit with his Russian counterpart Sergey Lavrov at Guilin in March, Chinese Foreign Minister Wang Yi emphatically condemned the foolishness of the EU’s sanctions, saying, “these perverse practices cannot stop China’s progress, nor can they reverse the tide of historical development.”  One development in this historical trend is China’s growing importance for the EU’s economic recovery via the gains of trade.  For the EU to reap full advantage from those gains, it must trade rationally as a trading bloc with China, putting specious political allegations aside.  Only then can EU countries unlock the opportunities of their high trade volumes with the world’s second-largest economy, one that is roaring back from a pandemic with its international market-shaping weight needed more than ever.