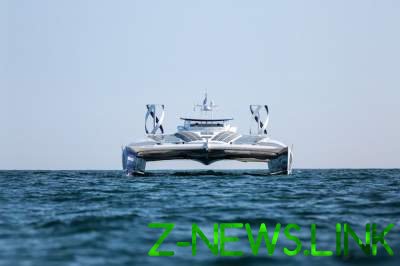 The catamaran also will extract energy from the wind and waves.

We all know Toyota cars – petrol, diesel, natural, hybrid and in recent years electric and even hydrogen. But the boat Toyota? There is such.

Toyota has a lot of units, among which there are shipbuilding. Is it any wonder that the Japanese brand decided to use their own experience in alternative forms of energy and the available communications Maritime vessels to Express themselves around the world.

So Toyota became a partner of the project Energy Observer – not just the world’s first hydrogen vehicle, but also the world’s first fully environmentally friendly marine vessel. And believe me, it’s not just empty words for advertising Prosvetov.

The Energy Observer catamaran was built already in 1983, but don’t think that this is some kind of floating junk. The ship has been repeatedly modernized and in its latest incarnation, is an ultra-modern vessel.

The most modern version of Energy Observer was shown in April 2017 in France. The catamaran has a hull of over 30 meters in length, width over 12 meters and a displacement of 28 tons. On the water the ship is able to develop up to 8-10 knots max speed, which is about 15-19 km/h.

See also:  Around the representative of Ukraine at Eurovision scandal erupted. Video

But not size and speed characteristics are chip Energy Observer is a ship on the other! Suffice it to say that almost the entire surface of his body literally lined with solar panels, and a pair of high-rise landmarks are wind generators.

In addition to producing energy from solar and wind, Energy Observer are able to benefit from the waves also provide energy, and use water to produce hydrogen, which is the main feature of the ship.

Due to the fact that the water in the electrolysis process splits into hydrogen, it is supplied in compressed form in the fuel tanks of the catamaran, and then used as a fuel source for the power plant on fuel cells.

Energy Observer is the world’s first ship that does not emit greenhouse gases and small polluting the air and water particles, and the only “exhaust” from the operation of the ship is ordinary water.

In 2017, the Energy Observer, which supports Toyota Motor Europe, left the port of Saint-Malo in France and went to a 6-year journey around the world, which is scheduled to go at least 101 port 50 countries around the world.

2020 visit environmentally friendly catamaran is scheduled to Japan – home of the summer Olympic games in Tokyo Toyota will show a lot of technologically advanced vehicles, among which will be Energy Observer.

The global objective of the project is simple and brilliant at the same time to demonstrate to all humanity the potential for environmentally sound sources of energy.

But for Toyota it is an opportunity to link its hydrogen sedan Toyota Mirai, trucks, buses and specialty vehicles fuel cells and even houses and shops with futuristic naval ship.