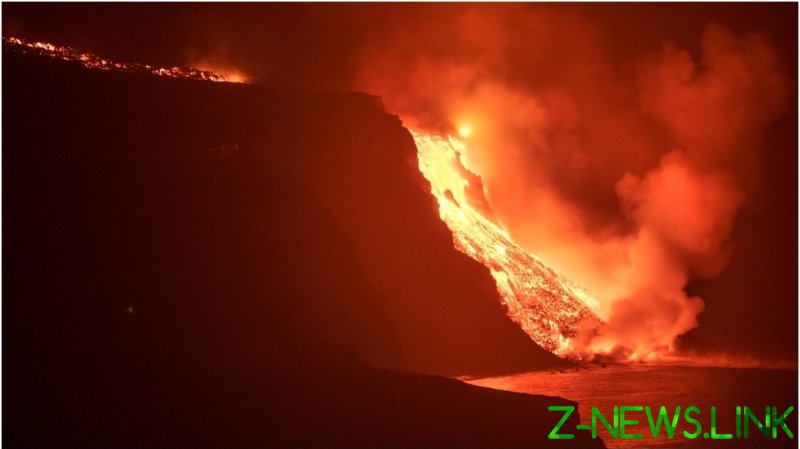 The lava from the Cumbre Vieja volcano on the island of La Palma reached the ocean near the town of Tazacorte shortly after 11pm local time on Tuesday, news channel TVE Canarias reported.

The volcano, which began erupting on September 19, has been ejecting massive flows of lava that have destroyed crops, roads, houses, and villas in the countryside.

Videos shared on social media show that a delta has formed as red-hot lava continues to move down the coastal cliff and slide into the water.

The islands’ emergency services have urged everyone in the area to look for “a safe place” and stay there.

Volcanologist Claudia Rodriguez told local media that, due to a vast difference in temperatures, a “thermal shock” occurs when lava comes into contact with seawater. “This is why columns of water vapor are being produced, but they are loaded with hydrochloric acid as the result of the presence of chloride in seawater.”

Science journalist and volcanologist Robin George Andrews told the BBC that gas plumes created on such occasions can cause eye, lung, and skin irritation, but he said this should not be a problem if locals keep their distance.

Canary Islands President Angel Victor Torres also warned about the clouds of toxic gases. He expressed hope that lava will continue to flow into the ocean, rather than keep spreading on the surface.

More than 650 houses have been destroyed by the lava flow as of Wednesday, according to the EU’s Copernicus Emergency Management Service. Over 6,000 people were evacuated, and no one was killed.

The last eruption on the Canaries occurred in 1971, which was the last surface eruption on Spanish soil.