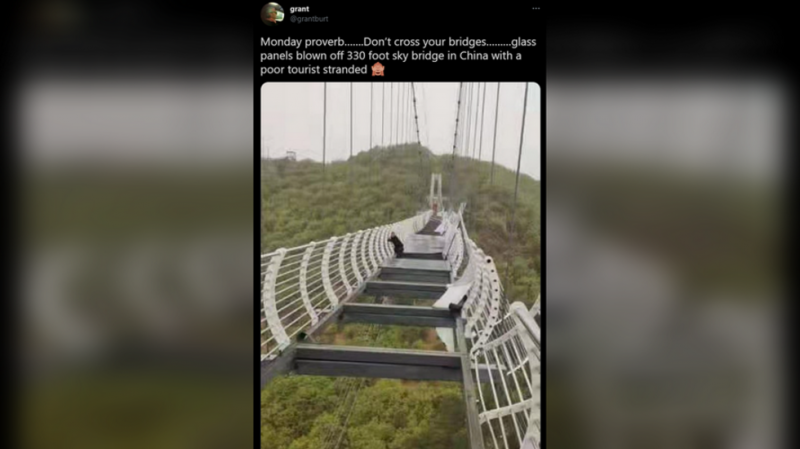 The walkway, located in the Piyan Mountain resort in the city of Longjing, was partially destroyed by violent winds on Friday – leaving the terrified tourist stranded 100 meters (328 feet) from the ground.

A photograph published by Chinese media shows the man sitting on a beam as he wraps his arms around the bridge’s railing. A terrifying drop is seen below him, with the walkway destroyed on both sides of him.

The man was reportedly trapped on the badly damaged bridge for more than 30 minutes before emergency workers were able to help him crawl back to safety.

After surviving the harrowing ordeal, the tourist was sent to a hospital for psychological counseling.

The resort where the bridge is located has since been closed until further notice.

The near-fatal accident triggered a wave of responses on Chinese social media, with many people expressing concerns about the safety of such structures. People were similarly horrified on Twitter.

Glass-bottomed bridges have become increasingly popular in China. According to one estimate, at least 60 such walkways have been built or are under construction as of late 2016. The country’s best-known glass bridge, located in the city of Zhangjiajie, northwest of China’s Hunan province, hangs at an eye-popping 300 meters (984 feet) from the ground.

In recent years, some areas of China have instituted stricter safety guidelines for the popular tourist destinations.