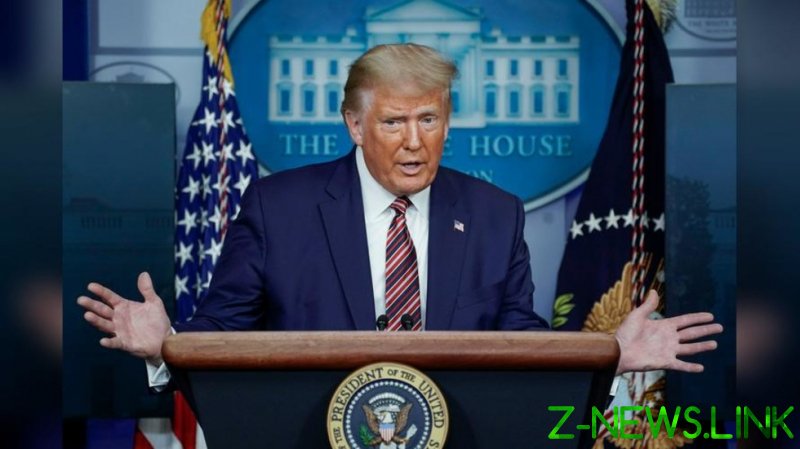 “It’s totally fake news – made-up, fake,” Trump told reporters Sunday in a White House briefing, noting that he had to deal with similar questions when the Times published a story on his taxes in 2016. He added that he will be “proud” to show his returns when an audit of his tax filings is finally finished, but “the IRS does not treat me well. They treat me like the Tea Party.”

The Times said Trump paid no federal income taxes in 10 of the 15 years before he was elected president and paid just $750 in 2016 and again in 2017. The newspaper didn’t say where it obtained copies of Trump’s tax filings, the leaking of which would be illegal.

Trump said his business organization files more than 100 pages of information from its various companies for its tax returns each year, and those documents will be much more revealing. He said he has paid “a lot” of income taxes, including New York state taxes, and that information will come out after the audit. Trump said his organization has been negotiating with the IRS “for a long time.”

“I’m going to release many things, and people will be really shocked,” Trump said. “But the New York Times has been doing fake story after fake story. I’ve never seen anything like it. And people understand it. That’s why the media has such a low approval rating now because of what they’ve done. It’s really a shame.”

The Times admitted the limited nature of its reporting, saying “the filing will leave many questions unanswered, many questioners unfulfilled.” The filings don’t reveal Trump’s true wealth, the newspaper said, “nor do they reveal any previously unreported connections to Russia.”

Trump’s political opponents wasted no time in seizing on the source-based “scoop” to pounce on the president, sending #TrumpTaxReturns and #TrumpisBroke trending on Twitter.

Andrew Weissmann, who was a lead prosecutor in the Mueller probe into the now-debunked theory that Russia colluded with Trump to help him win the 2016 elections, tweeted that “the lesson from the NYT Trump tax piece is apparently paying US taxes is just for losers and suckers.”

Sen. Christopher Murphy (D-CT) accused Trump of leading a lavish lifestyle at the expense of blue collar workers, tweeting: “Plumbers and teachers and fast food workers and accountants were (and still are) paying for his lifestyle.”

“It’s outrageous that hard-working Georgian families pay more in taxes than Trump. He’s not a president for the people — it’s time to vote him out,” the Democratic Party of Georgia charged.

Many noted that the timing of the Times’ “bombshell” might come handy to Democratic presidential candidate Joe Biden, who is to debate Trump in just two days.

Trump supporters, however, were amused, if not impressed, by the Times’ findings, arguing the report has revealed nothing illegal.

Observers noted that even the supposedly gotcha allegations of Trump’s business losses and tax avoidance were typical fare that go unreported on other major corporations. “Despite the euphemistic language, you get to the bottom of the article (eventually) and realize that it’s a total dud,” UK journalist Raheem Kassam tweeted.

Journalist Michael Tracey said the admission of no titillating Russia connections “must’ve been a real heart-breaker for the NYT.”

Journalist Aaron Mate noted that between Bill Clinton’s $500,000 speaking fee in Russia and the $3.5 million that the wife of Moscow’s mayor allegedly wired to Hunter Biden, both of the last two Democrat presidential candidates have had “deeper financial ties to Russia than Trump.”