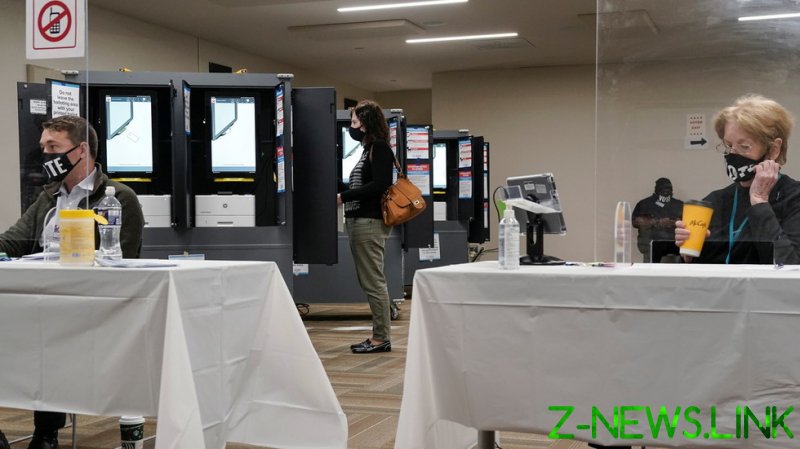 With about 95 percent of the total vote in, incumbent David Perdue was ahead of his Democrat challenger Jon Ossoff by mere 0.4 percentage points, while Raphael Warnock led Republican Kelly Loeffler 50.2 percent to 49.8 percent, according to Edison Research.

Democrats hope to win both seats in what was once a solid Republican stronghold and gain parity with the GOP in the Senate, where the incoming Vice President Kamala Harris could then act as a tie-breaker.

If Republicans keep their Senate majority, the Democrats will not be able to implement many of the sweeping changes they’ve proposed under the new administration, from enlarging the US Supreme Court to admitting the District of Columbia and Puerto Rico as new states, among others.

While both Perdue and Loeffler came out ahead of their challengers in the November 2020 election, they did not get more than 50 percent of the vote, forcing a run-off race under Georgia law. Joe Biden’s surprise victory in the presidential election – which Georgia’s Republican leadership upheld, rejecting all challenges by President Donald Trump – demoralized the GOP base while energizing the Democrats.

Georgia was one of the five states where Trump was leading on Election Night only for Biden to surge ahead due to massive numbers of mail-in ballots that disproportionately favored the Democrat. The run-offs were held using the same rules as the general election, with mainstream media outlets cautioning that the results may not be known until all mail-in ballots are counted.

Though at odds over the presidential election, both Trump and the GOP leadership urged their supporters to vote for Loeffler and Perdue. Trump drew a large crowd in Dalton, Georgia on Monday, at a rally seeking to boost the Republicans’ chances.

As polls showed them trailing behind Ossoff and Warnock, both Perdue and Loeffler eventually said they would object to certifying the presidential election results, to Trump’s delight.

Perdue’s campaign suffered a setback last week, however, after he went into self-quarantine over potential exposure to someone who tested positive for Covid-19.

Loeffler was appointed by Governor Brian Kemp to replace Sen. Johnny Isakson, who retired in December 2019 citing health reasons. Perdue has served in the Senate since 2014, when he won almost 53 percent of the vote to replace the retiring Sen. Saxby Chambliss, also a Republican.

Ossoff had previously run for a seat in the US House of Representatives from Georgia’s 6th congressional district, but lost the 2017 special election to Republican Karen Handel.