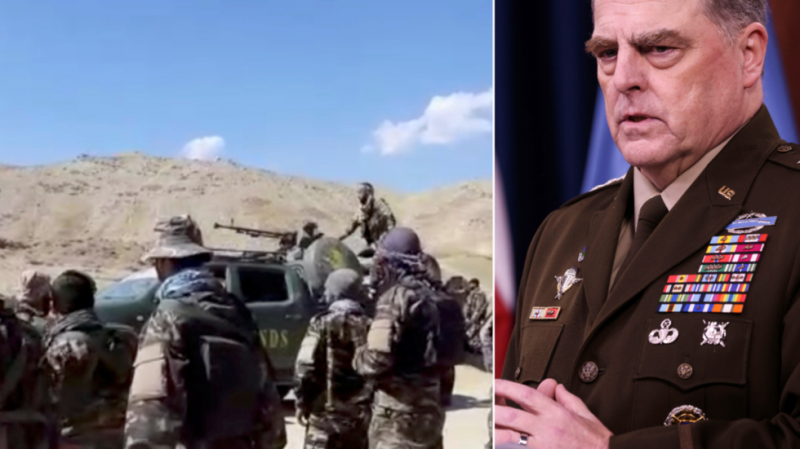 “My military estimate is… that the conditions are likely to develop of a civil war,” the chairman of the Joint Chiefs of Staff told Fox News’ Jennifer Griffin on Saturday. Following its blitz takeover of Afghanistan, the Taliban now controls most of the country except for last pockets of resistance in the Panjshir Valley. Heavy clashes continue in the strategic region, despite both sides insisting to have advantage and claiming to have inflicted heavy losses on their enemies.

READ MORE: Taliban asks its fighters to stop shooting in the air after reports of people killed & injured in celebratory gunfire

Milley expressed doubt that the Taliban will be able to establish a sustainable government, and warned that power vacuum and chaos could lead to resurgence of al-Qaeda, Islamic State and “other myriad” of terrorist groups. In order to keep America ‘safe’, President Joe Biden’s administration previously vowed to continue “over-the-horizon” counterterrorism missions, but Milley admitted that with no troops on the ground and crippled intel gathering capabilities, the US “will have to reestablish some human intelligence networks.”

Meanwhile, the standoff between the Taliban and the Panjshir resistance, that has been shaping up since mid-August, continues.

The valley is located north of Kabul and controls a key strategic road to eastern Afghanistan. The region was made into a separate province by the US-backed Afghan government after the Taliban was ousted in 2001. It is currently held, at least partially, by fighters loyal to Ahmad Massoud, son of an anti-Taliban leader assassinated in 2001, who declared themselves the National Resistance Front of Afghanistan (NRFA). Also among the ‘resistance’ is Amrullah Saleh, who served as vice president in the US-backed government and now styles himself the rightful president of Afghanistan.