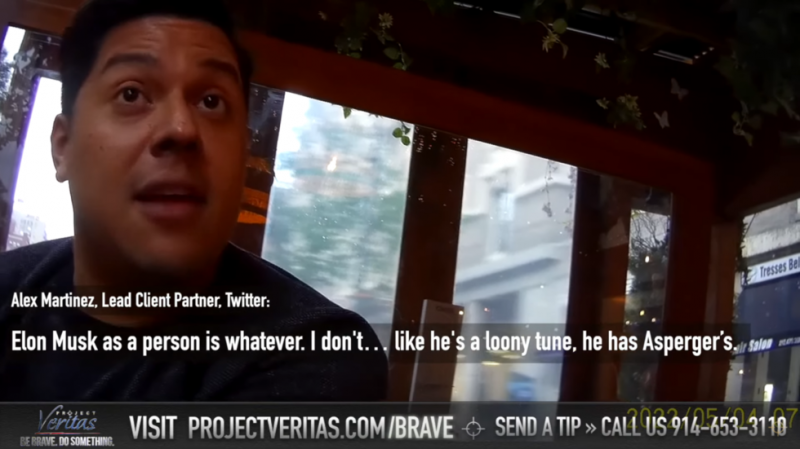 A senior Twitter executive has apparently been caught on tape mocking Tesla CEO Elon Musk for having Asperger’s syndrome, while criticizing free speech.

In an undercover video posted by Project Veritas on Tuesday, Alex Martinez, who is claimed to be Twitter’s lead client partner, and who sometimes speaks on behalf of the company at events, alleged that Musk is “literally special needs” and that he can’t take anything he says seriously, adding that “he’s a loony tune.”

“Elon Musk as a person, he is whatever. I don’t… like he’s a loony tune, he has Asperger’s,” Martinez said, adding that Musk being “special” is “fine” and that no one is “gonna say some f**king crazy s**t because he’s special,” but did mock Musk’s calls for peace.

“Don’t you also see his piece about ‘why can’t we just all love each other? Haven’t you seen his other tweets where he’s like… I’m like, you’re special needs. You’re literally special needs. Literally, though, you really are. So I can’t even take what you’re saying seriously. Cause you’re special.”

Martinez also went into a long rant about free speech, arguing that the employees of Twitter “believe in something that’s good for the planet and not just to give people free speech.”

He claimed that this ideology was behind Twitter’s policies that were “put in place for misinformation or mislabeling media,” which the employees were not going to give up without a fight, insisting that there would be a revolt against Musk’s proposed changes.

In the video clip posted, the executive also commented on the issue of censorship on Twitter, stating that “people don’t know how to make a rational decision if you don’t put out correct things that are supposed to be out in the public.”

He also expressed concern that Twitter’s leaders, such as current CEO Parag Agrawal and ex-CEO Jack Dorsey, who co-founded the platform and currently sits on the board of directors, are motivated by greed.

At the end of the video, Martinez also showed the undercover reporter an email that Twitter’s corporate security had sent out to employees, warning them of sting operations like the one actually being carried out by Project Veritas.

“Like they’re trying to go on dates with them, like this,” Martinez told the undercover reporter. “Lucky I met you organically, or I would be questioning you.”

On Monday, Project Veritas released another undercover video in which a supposed senior engineer at Twitter admitted that the company culture was extremely far left and that many of the workers are “commie as f**k” and hate Elon Musk’s $44 billion takeover.

The engineer also said that Twitter “did not believe in free speech” and was actively censoring conservatives on the platform.