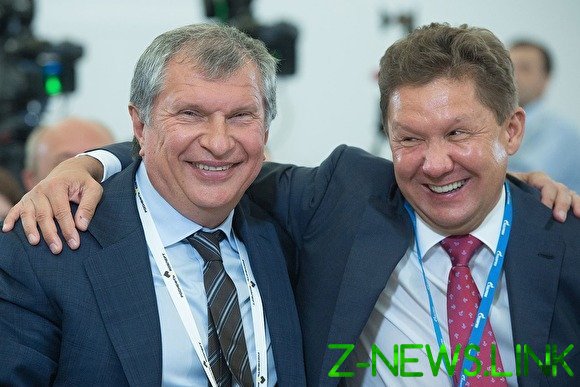 Top managers of “Gazprom” and “Rosneft” became one of the leaders of the rating by Russian Forbes for premiums, which they received last year. According to RBC, Gazprom has paid 4.3 billion rubles, 17 employees, compared with 4.5 billion in 2017 year. Managers of “Rosneft” (also 17 people) received a little more than 4 billion rubles. Compared with 2017 the amount is almost not changed.

First place in the ranking is held by the employees of MMC Norilsk Nickel that is spent on paying premiums to them more than other large companies of Russia — 6.8 billion rubles to 23 employees.

The publication analyzed the annual reports of 100 companies with the largest 2018 capitalization, selecting 25 of them, where the top management received the largest payments. In the calculations, account was taken of the salaries, bonuses by results of work for the year, but did not include payments calculated on the basis of the level of capitalization of the company, and income received by top managers from the ownership of shares.

These 25 companies spent in total on payment of the leadership awards to 54.5 billion rubles. Most paid representatives of the oil and gas sector (they accounted for 17.3 billion rubles), banks (9.6 billion) and metallurgical company (9.4 billion rubles).

The list also hit the company Arkady Rotenberg’s Mostotrest, finishing in eighth place with a total of 2.5 billion roubles. Data on the number of managers who received payoffs, is not provided. Forbes notes that, according to the quarterly reports “Mostotrest” on payment to the Board of Directors of the company up to 2018 has been allocated only 91.9 mln rubles. The publication indicates that this difference can be explained by the fact that IFRS reporting (where indicated 2.5 billion) accounted for payments made by the management subsidiaries and affiliates. In addition, management personnel apart from the Board of Directors and management Board members also include top managers of the lower link. “Mostotrest” has not responded to a request to comment on the payout structure and number of managers who received them.