Top 10 ANTI-WOKE CELEBRITIES who held their ground in 2020 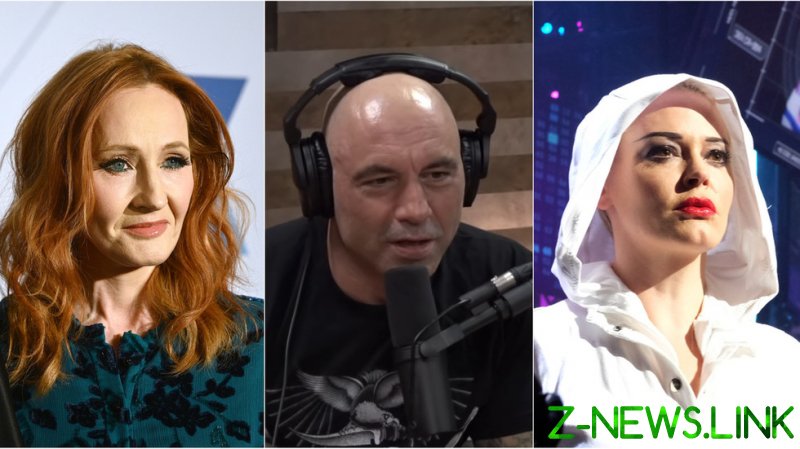 With the Covid-19 pandemic and ensuing lockdown restrictions, plus a US presidential election that sucked up everyone’s attention, 2020 provided a plethora of opportunities for celebrities to virtue signal and prove their SJW bona fides.

Luckily, however, the woke beast that is the collective political thought bubble pushed by Hollywood also saw some significant pushback from fellow artists unwilling to keep quiet. Here is a look at the 10 who found the most success calling out the hypocrisy and speaking truth to power.

What’s shocking about this ‘Justified’ star is that despite his loud and proud conservatism and Donald Trump support, Searcy maintains a fairly successful career, working with major directorial talent like Guillermo Del Toro and popping up on series like ‘9-1-1.’

Searcy upped his outspokenness in 2020, becoming especially critical of Covid-19 lockdown orders in California and politicians like Gov. Gavin Newsom promoting following the new rules, but then openly defying them.

You can find Searcy openly defying Los Angeles pandemic restrictions with his series of “non-essential” walks regularly posted to Twitter and tagged with both Newsom and Los Angeles Mayor Eric Garcetti’s accounts.

Despite a plush gig on Disney Plus’ ‘The Mandalorian,’ Carano defied numerous social media pushes to get her fired or canceled this year. Through her Twitter account, she’s faced baseless accusations of racism and transphobia for liking tweets from conservative pundits.

She also posted an image mocking “Democratic government leaders” and their leadership during the pandemic. She received predictable pushback once again, but still refuses to stay silent.

Hosting the Golden Globes in January, Gervais eviscerated celebrity culture before Covid ever came along, begging those in attendance to not preach down to the rest of the world with their politics and rightly calling out the industry as a whole for supporting liberal causes while being connected to, and sometimes remaining silent about, figures like Harvey Weinstein.

Hollywood award shows have become breeding grounds for everything that is so easy to despise about celebrities: high-horse political preaching, out of touch views shoved down our throats by millionaires, ever-changing social justice goalposts, patting one another on the back for absolutely nothing. It’s nonsense, and it was a breath of fresh air to see a comedian like Gervais call it out as such, right in front of their squirming faces.

Musician and author Nick Cave will never be someone accused of not being willing to tell it like it is, and he did exactly that in a letter this year posted to his website torching cancel culture as “mercy’s antithesis.”

“Political correctness has grown to become the unhappiest religion in the world. Its once honourable attempt to reimagine our society in a more equitable way now embodies all the worst aspects that religion has to offer (and none of the beauty) — moral certainty and self-righteousness shorn even of the capacity for redemption,” he wrote.

Cave of course made waves with liberals whose contentment is entirely based on their belief that they are righteously doing battle for the betterment of mankind when they slap some keys on a laptop and attack anyone with differing opinions.

There were few responses to Cave’s actual points though and mainly just accusations based on his being white and straight and, therefore, unable to have an opinion on the matter, proving the singer is right that cancel culture is simply “bad religion run amuck.”

‘Interstellar’ star Matthew McConaughey also found himself the target of hungry woke warriors on social media recently when he put Hollywood liberals in his crosshairs and accused them of being patronizing and condescending towards the half of the country that votes differently.

His call to “meet in the middle” more often was slammed by leftist thinkers as white privilege in tweets that border between impressive mental gymnastics and just plain word vomit.

Who would have thought rapper Ice Cube, who only recently released the song ‘Arrest the President,’ would be accused of being a Trump supporter? Only in 2020, folks.

The rapper was in hot water when it was revealed that he had met with White House advisor Jared Kushner to work on an economic plan to help black Americans. This plan included hundreds of billions of dollars for black-owned businesses, as well as a promise to designate the Ku Klux Klan a terrorist organization.

One of the biggest crimes on the left today is being willing to talk to the other side, so Cube found himself in heated exchanges on social media and in interviews as he was forced into defense mode. Cube, however, never took the low-hanging fruit and apologized. Instead he stood his ground, a rare thing to see from a celebrity staring down the barrel of cancel culture.

This British actor has practically become the face for anti-wokeism in the UK. His opinions, such as questioning the narrative that Meghan Markle’s treatment in the media amounts to racism or that a Sikh soldier perhaps doesn’t belong in ‘1917,’ a film about World War I, have rattled social justice warriors, especially as they come from the mouth of an actor, someone who should, like the rest, speak and behave the way he is told.

Fox’s willingness to step on the toes of woke narratives will not be ending anytime soon. It was revealed in September that the ‘Lewis’ star was launching his own political party, with the goal of reclaiming “British values.”

Rose McGowan may be one of the strongest voices to come out of the #MeToo movement, but she is no friend to the left.

While her ‘Charmed’ co-star Alyssa Milano finds the stomach to cast a vote for Joe Biden while also believing accuser Tara Reade’s allegation of sexual assault, McGowan refuses to compromise.

The actress and activist has called Biden and the Democrat Party “frauds” and “monsters” and even threw her weight behind Matthew McConaughey and his criticism of “condescending” Hollywood. She is an enigma to the political left, as their ‘inclusive’ politics are nothing but hollow showmanship, something she is not afraid to call out.

The treatment of JK Rowling by the woke mafia is crystal clear proof there simply is no nuance or room for discussion when it comes to debates that involve the term ‘trans.’

The ‘Harry Potter’ author has become the face of ‘transphobia’ for many as she’s received waves of death threats and even public criticism from cast members famous thanks to her stories. It’s all over Rowling simply acknowledging certain truths too ugly for the woke to even consider as true. She criticized a story referring to “people who menstruate” instead of ‘women’ and acknowledged the phenomenon of some who receive gender reassignment and later regret it.

Despite the heavy backlash, Rowling has refused to back down. What’s head-scratching about the ongoing affair is the author has never made herself out to be anti-trans, but rather simply pushed back on smaller pieces of the culture. Ask enough questions, however, and you get labeled hateful today.

Joe Rogan’s success in the world of podcasting perplexes Hollywood celebrities stuck in their liberal bubbles. Alyssa Milano actually openly questioned this year how his podcast could be so much more successful than hers. If you didn’t know Milano had a podcast, don’t worry. Very few actually do.

What’s behind Rogan’s success is a combination of his everyman, working class style and his ability to talk and engage with absolutely anyone on almost any subject. His natural curiosity and willingness to learn more about a subject before having an ironclad opinion on it is a rare thing to see from someone in the public eye today, and it’s also led to pretty major backlash.

Rogan has been slammed as racist for associating with conservative thinkers like Alex Jones, who he invited on his show once again this year, and transphobic for having the simple opinion that perhaps sports should have rules that take into account natural genetics when it comes to transgender athletes. Rogan has even faced defiance from liberal Spotify employees, triggered by his massive contract to move his long-running show over to the platform. Rogan’s response has been pure mockery and refusal to stay away from controversial subjects or jokes.

Even with his new Spotify deal though, Rogan remains an independent success. He owns his own pirate ship and relies on no one else to pay the bills or give a stamp of approval to everything he says. Independence is really the only way for non-liberal artists to find any success these days, and Rogan is proving day in and day out the limitlessness to the success one can have on their own. He bows to no one, offers no empty apologies, and is definitely the biggest thorn in wokeism’s side.