Home / WORLD / ‘Too soon to give up’: Trump slams Senator Mitch McConnell for congratulating Biden, urges Republicans to ‘learn to fight’

‘Too soon to give up’: Trump slams Senator Mitch McConnell for congratulating Biden, urges Republicans to ‘learn to fight’ 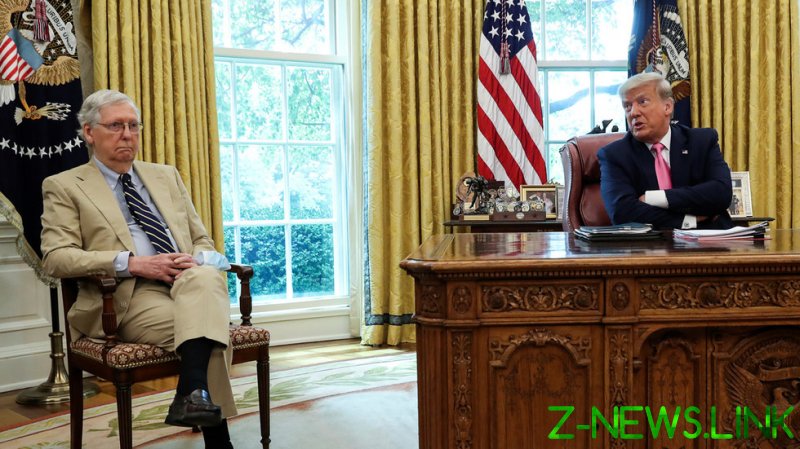 Trump took to his social media of choice, Twitter, on Wednesday, venting his anger at the top Republican senator’s words.

“Mitch, 75,000,000 VOTES, a record for a sitting President (by a lot). Too soon to give up. Republican Party must finally learn to fight. People are angry!” he wrote.

The remark came in response to a statement made by McConnell on Tuesday in which he acknowledged Biden’s win after the electoral college vote, congratulating him and Vice President-elect Kamala Harris.

“The Electoral College has spoken,” McConnell said, noting that “as of this morning, our country has a president-elect and a vice president-elect” even though “many millions of us had hoped the presidential election would yield a different result.”

Apart from publicly acknowledging Biden’s victory, McConnell has reportedly privately warned fellow Republican senators against challenging the election results, urging them to not dispute the Electoral College decision during the upcoming joint session of Congress to confirm the results. The session is scheduled to take place on January 6.

The words of the Senate majority leader have angered Trump’s supporters, with the most hardcore going so far as to accuse McConnell of being a “traitor.”

“McConnell just wants power, influence, & money. He is willing to sell America to get what he wants. McConnell is a traitor to American Patriots,” Trump campaign attorney Lin Wood said.

A similar statement was produced by Representative-elect Marjorie Taylor Greene, who played some old school Cold War-style tunes, accusing every Republican not supporting Trump of being a tool of Chinese communists.

Former national security advisor Mike Flynn, recently pardoned by Trump, has joined the outcry as well, stating that “millions and millions and millions” of patriots are standing behind the president and do not “fail or cower like some in the Republican Party.”