Home / WORLD / Too risque? Pakistani students expelled from university after hugging on camera

Too risque? Pakistani students expelled from university after hugging on camera 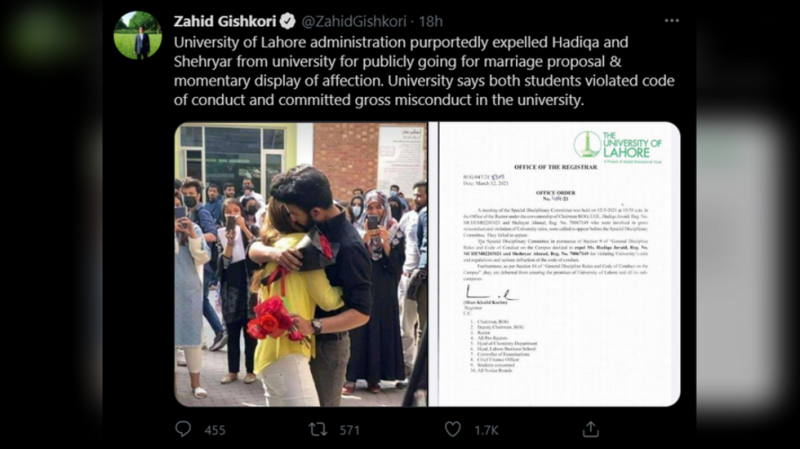 Photos and videos circulating on the internet show a young woman proposing to her partner as she bends down on one knee and offers him a bouquet. The man then takes the flowers and pulls her up for a hug. The heartwarming moment was met with applause and cheers from bystanders, but it appears that the university’s administrators felt differently about the seemingly benign affair.

According to a letter released to the media, the university charged the lovers with “gross misconduct” and summoned them to appear before a disciplinary council. They were expelled on Friday after the committee concluded that the pair had engaged in a “serious violation” of the university’s code of conduct. The two students reportedly failed to show up for the hearing.

The decision sparked a firestorm of condemnation on social media, with pundits railing against the university.

“A country where pedophiles are defended and protected in the name of child marriage and converting religion of little girls we are uncomfortable with two consenting adults expressing love for each other. We reduce our so called morals to a joke everyday,” wrote prominent Pakistani lawyer and activist Jibran Nasir.

Others accused the university of “moral policing” while turning a blind eye to more pressing matters.

“No one should be expelled for professing love. Both are consenting adults,” wrote one upset observer.

However, there were some who expressed support for the couples’ expulsion, arguing that the university must maintain “discipline” and that the students’ parents would likely disapprove of their public display of affection.

This isn’t the first time that the media has run stories about hug-related expulsions. In 2019, two students were dismissed from a university in Egypt for the “immoral act” of hugging after their marriage proposal was caught on camera. Administrators reversed course and allowed the pair back on campus following public outcry.