Home / WORLD / Too few black faces, too many white women: As a top BAME exec leaves the BBC, it stands accused of becoming ‘Karenised’

Too few black faces, too many white women: As a top BAME exec leaves the BBC, it stands accused of becoming ‘Karenised’ 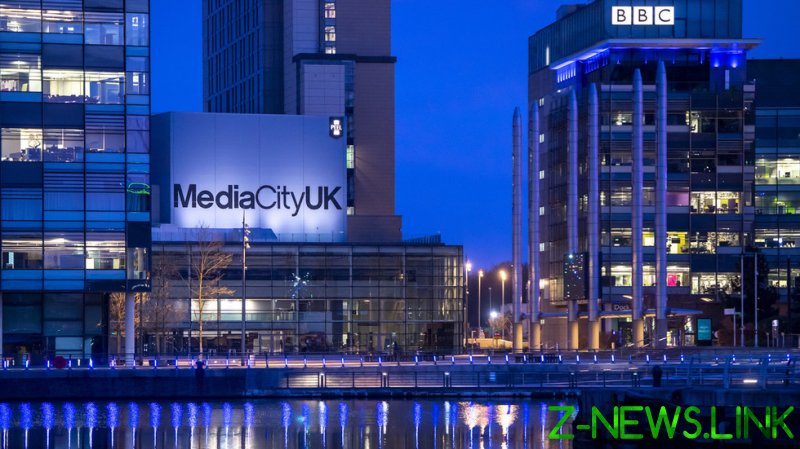 Given the revolving door of back-slapping, overpaid executive media gigs in Britain, which generally consist of haranguing a small army of grunts via iPhone while swanning from one lunch meeting to another (lockdown notwithstanding), ordinarily a sacked hack’s hard luck story wouldn’t rustle one’s notebook.

However, having held down jobs such as the BBC’s economics editor, political editor of the Observer, and the Sunday Telegraph’s business editor, Mr Ahmed has not only left the corporation with a gaping talent hole, he leaves its editorial backbench bereft of a single ‘person of colour’. Despite a much-publicised hoo-ha about increasing ‘diversity’ among senior management, which stressed that senior leadership groups should have at least two staff members from minority ethnic backgrounds, the BBC, in a classic ‘fork tongue’ move, has developed a race-based policy, then completely ignored it.

On paper, Mr Ahmed is the victim of an £80 million cost-cutting ‘modernisation plan’ aimed at trimming some of the fat off the corporation’s £3.7 billion-a-year public funding. But how ‘modern’ is it to dump a highly talented black journalist less than three years into the job, especially when there are so few of us in stellar positions, and after using him as the hatchet man to get rid of 450 BBC staff? This is about as modern as the old colonial ruse of using an ethnic third party as middlemen between bwana and the restless natives.

This might sound ungenerous, especially as I have great respect for the BBC, having worked for the corporation on many an occasion over the years. But it’s a sorry state of affairs when even a right-wing Tory cabinet of 22 people has more black people in positions of power, authority, and influence than a state media machine employing 22,000 people.

Not that Ahmed will be playing the race card in a hurry. For one, his exit through the BBC gift shop will be sweetened by a generous payoff, at the taxpayers’ largesse, commensurate with his £205,000 to £209,999-a-year salary. Critics will also note that the post of editorial director – a ‘non-job’, created by former Director-General Tony Hall, which promoted Ahmed to the editorial board – and his trousering of £12,000 for a corporate side hustle, just days after culling hundreds of colleagues, meant that he ‘had it coming’.

According to a Daily Mail ‘BBC insider’: “People didn’t like him. They didn’t understand how he was elevated so quickly, and many didn’t forgive him for that speech to a hedge fund while lots of job losses were being announced here.”

“People didn’t like him” is, of course, extended code for “he was uppity.” People go to work to make money, not line up in a beauty pageant. Also, the idea that someone as talented and experienced as Ahmed was “elevated so quickly” is not only nonsense, it reinforces a cultural libel that black people only get on in mainstream Britain through ‘tokenism’.

While the corporation loves to bang on in its programming about how bigoted ‘the man’ is and how black people are trapped in a perpetual racist hamster wheel thanks to ‘structural inequality’, ‘white privilege’, and ‘systemic and institutionalised racism’, it ignores the fact that it keeps one knee firmly on black advancement while seemingly giving a leg up to its greater beneficiary of ‘positive discrimination’: white women.

The New Labour and neo-Tory era white female putsch at the Beeb has also led to colonisation of key positions in the commercial sector. In 2008, Dawn Airey broke through the glass ceiling to become Channel 5’s CEO; today, just scan the ‘who we are’ sections of the UK’s top 100 independent production companies and you’ll find more grinning white women there than a Take That concert.

Aside from these marquee positions, in the past 20-odd years, women have taken key roles all over the BBC – from drama to news, and current affairs to factual entertainment – which cannot be commended enough.

But even accounting for demographic disproportionalities, one can parse the shocking disparities in ‘leadership’ today between women and black people at the corporation – even in areas where you’d expect history would favour ‘BAMEs’.

Take BBC Radio, for instance. Women at senior management here account for 42 percent, yet despite having practically invented pop music – and with hip-hop, RnB, rock, reggae, blues, jazz and so on dominating the airwaves – you’d be hard pressed to find a black cleaner working within this significant branch of state broadcasting, let alone a senior black executive.

While the number of black staff employed across all job levels may well be on par with the national average of three percent, when it comes to senior managers, at just one percent, we’re virtually non-existent in positions of power or influence. Accusations of ‘privileging’ white women over black people have led to a growing number of critics claiming the corporation has become ‘Karenised’.

“When it comes to ‘diversity’, white women are top of the pecking order,” one BBC source told me. “They’re quick to label white men as racist, but on the sly they move forward and throw you [black people] under the bus so they can leverage power. They’re holding us back more than anyone else, and the suits just go along with it because they want an easy ride.”

Ironically, it could be print journalism’s fifth columnist takeover of a crumbling BBC, and the infiltration of the wider broadcast media, that’s put paid to Ahmed. With the corporation now a repository for hacks who have decamped from Fleet Street following falling ad revenues, declining investment in print journalism, and the broadcast media’s holier-than-thou rubbishing of print over the Leveson inquiry, the chickens are coming home to roost. But among those chickens there’s a sly old fox, to boot.

With Daily Mail editor Paul Dacre set to become chairman of the UK’s broadcasting regulator, Ofcom, the BBC faces tough times ahead. The whopping £3.7 billion in funding it raises from forcing 25.7 million licence fee payers to cough up for a product a growing number don’t want or need grates particularly with black audiences, which Ofcom warns need to see “greater equality of opportunity within the BBC,” not just in terms of fairness, but “to ensure [it] can resonate with, and deliver for all its audiences.”

Now that Boris Johnson has his boy taking over the helm at Ofcom, what next… BBC D-G? It would be the irony of ironies if Dacre’s legacy was the dismantling of the BBC for his Tory masters, and all because its liberal hierarchy had its nose too deep in the trough to make sure everyone had a piece of the pie. When TV presenter David Olusoga told the Edinburgh TV Festival last year that working for the likes of the BBC had left him feeling “crushed, isolated, [and] disempowered,” he spoke for many black people in a multibillion-pound UK media for whom a white elite is only interested in one colour: green.

In July 2017, the publication of the BBC’s highest-earning presenters exposed a yawning sexist pay gap between men and women at the top of the list. Rightly, it caused a scream up, forcing the Beeb into an embarrassing attempt at levelling the gender divide. However, what it also uncovered was the total absence of black or brown faces in the corporation’s big money leagues – a de facto form of liberal racism that trickles all the way down to the shop floor, where most black staff remain rooted until they get fed up and either move over to commercial media outlets or sadly quit the business altogether.

Broadcasting isn’t brain surgery. The fact that Fran Unsworth and other white female executives at the BBC earn more than double what the prime minister does – for doing what, exactly? Keeping the BBC’s upper echelons white? – shows what a carve-up the corporation has become. Once upon a time, women at the Beeb had complained about it being ‘pale, male and stale’ – and they had some pretentions towards intersectionalist redress.

But not anymore. Having seen the existential writing on the wall, white sisters are now doing it for themselves, which is why this bloated, superannuated institution has gone from being a private-members’ club bestowing jobs for the boys to being a bogus wokefest of jolly hockey sticks for the girls. Plus ça change.