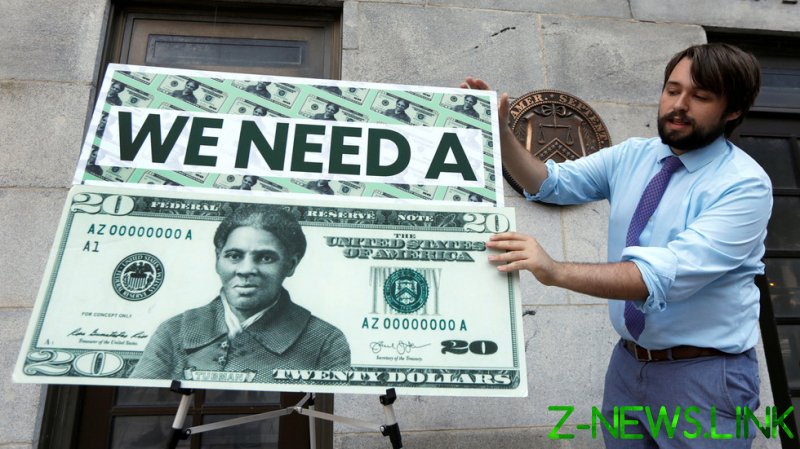 The debate now raging over replacing Jackson on the twenty with that of Harriet Tubman, the abolitionist and political activist who rescued hundreds of enslaved Southern blacks via the famous Underground Railroad, might seem like a no-brainer to the radical progressives of the Democratic Party. Why look a gift horse in the mouth?

After all, Andrew Jackson is arguably the epitome of everything the radical left says is wrong with the United States, which just happens to be its very historical foundation. The seventh president was not only a wealthy slave-owning planter, he also played no small role in helping to decimate the Native Indian population in the early 19th century. Perhaps most unforgivable, however, is that Jackson suffered from the seemingly incurable malignancy known as “white privilege,” which is still ravaging the nation judging by the smug pale faces that stare out from all US banknotes today.

Thus, in an age when the social justice mob is tearing down statues dedicated to the fallible Founding Fathers, doing something positive like adorning US currency with Tubman’s image could be seen as progress, right? Think again. According to some leftist luminaries, putting Tubman in circulation on the American banknote would evoke bitter reminders of the very capitalist system that enslaved millions of black people in the first place.

“I know in a country that worships at the altar of capitalism,” wrote Brittney Cooper, an associate professor at Rutgers University, in Time magazine, “a Black woman’s face on our currency seems like the highest honor we could bestow … but this is not the way to repay it.”

“If Tubman is going to be linked to conversations on capital, that conversation must be about a redistribution and funneling of … money into Black communities, to deal with wealth and wage disparities, access to education and safe housing, and a comprehensive plan of action to redress the social determinants of poor Black health. Anything else is downright disrespectful,” she continued.

Ironically, Cooper argues that dirty American banknotes, the wretched symbol of voracious vulture capitalism, are unfit to bear Tubman’s image – yet somehow they are good enough to shower Black communities with ever more social spending.

At the same time, I would hazard to guess that Professor Cooper is remunerated with US greenbacks and not Russian rubles, for example, for performing her professorial duties at Rutgers. Therefore, would it not seem more acceptable to the Black American community to accept cash payment, as well as government assistance with currency that carries the features of a prominent Black historical figure, as opposed to a White leader who did much to oppress them? Strangely, not everyone views the situation that way.

“Why would we want to put somebody who fought for freedom from this kind of capitalist oppression?” Feminista Jones, a Black activist and author asked in a Yahoo interview. “Why would we want to take her image and then make her the face of this thing that so many people lack access to?”

In all fairness, it must be said that many people – not just Black people – “lack access” to US dollars, and perhaps more so now than ever before. A report by Americans for Tax Fairness (ATF) and the Institute for Policy Studies showed that the fortunes the super-wealthy exploded by $434 billion – or 15 percent – during the nation’s lockdown (mid-March and mid-May of last year), hit $3.382 trillion. The tragic footnote to that eye-popping news is that more than 38 million working Americans – representative of people from all colors and creeds – lost their jobs amid what has been described as the greatest transfer of wealth in history.

It is certainly not the intent here to downplay the tragic history of Black Americans, who undoubtedly suffered one of the gravest travesties in modern history. Nevertheless, let’s not forget that the battle against slavery was eventually won, with tremendous sacrifices made by both Blacks and Whites. At the same time, it should not be casually dismissed that millions of Whites have also been subjected to the rapacity of a capitalist system that is not known for taking prisoners.

In 1906, for example, the muckraking writer and political activist Upton Sinclair penned the novel “The Jungle,” which exposed the horrific conditions then prevalent inside of the meatpacking industry. The bestselling book paved the way for major labor and sanitary reforms in all areas of industry. Meanwhile, and since then, all Americans have been subjected to the occasional disastrous hiccups of capitalism – from the Great Depression of 1929, to the financial collapse in 2008 to our present plight with Covid.

The fact is, capitalism – with the help of many reformers and political activists – successfully moved beyond slave trading, as well as many other egregious practices, although that’s certainly not to say there aren’t people slaving away in factories right now, working for pennies to the dollar. There certainly are. However, the very same activism and unionism that helped reform so many of the worst tendencies of the economic system are still at work today, trying to make the system fairer for everyone.

It would not be an exaggeration to say that the negative attitude to having Harriet Tubman’s image appear on the $20 bill resembles the same flawed logic that makes some people take a knee during the singing of the National Anthem to protest police abuse. It is counterproductive to condemn and tear down all institutions over a single problem. In fact, the best remedy is for the members of society to rally around its national symbols – even the dirty money supply – with greater enthusiasm out of a sense of unity and solidarity.

If nothing else, the critics should consider the tremendous learning opportunity the Tubman proposal would provide for millions of Black youth, some of whom may not be familiar with the amazing history of the black freedom fighter. Tubman taking her place on US currency, alongside past American presidents, certainly won’t end social inequality, nor will it reform capitalism, but it will certainly be a move in the right direction. The radical left should resist the temptation to “cancel culture” before it’s even been given a try.