Monday 1 July will visit Moscow Peter Fehervari — the author of the novels in the Warhammer universe, which will communicate with fans and will happily sign a book for everyone. To meet him could be in store Hobby Games on the Park of Culture (street Ostozhenka, d. 40/1) at 18.00. 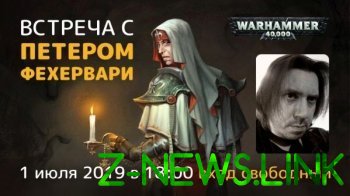 Peter will present his new book – “Infernal Requiem”, the limited circulation of which in the Russian language with exclusive author’s bookplate can be purchased in the store. The visit of the author was made possible thanks to the efforts of the publishing house “Fiction”.

Books by Peter Fehervari is a concentrated Warhammer 40,000, a real find for fans of the genre grimdark, where an eerie atmosphere of fear and death crazy even the most brave heroes. The writer raises complex, difficult for the other authors of the topic; tells about the characters of the universe, which many are afraid to begin a story. In these books, no place for light and hope and sticky horror permeates the story from beginning to end. These need to be novels, created based on the universe of endless war.

The book “Infernal Requiem” devoted, in particular, the Sisters of Battle — military-religious organization composed entirely of women. In the story on one of their planets arrive the surviving soldiers of the Astra Militarium, hoping to be healed of his wounds in a Sorority Last Candle. However, the closer they are to the target the more pernicious forces awaken storms whipped up among the spires of the planet, and the shadows in the hearts of the pilgrims are getting darker with every step…

For those who want to not only learn more about the new book, but located in other parts of the Warhammer universe — in store Hobby Games are a sets of actual miniatures for tabletop war-game, with the birth of which began with the release of numerous literature, comic books, computer and other games in the setting of the 41 Millennium.