Home / WORLD / ‘Time to stop the war’: Talks are the only way to resolve Nagorno-Karabakh conflict, Armenian president tells RT

‘Time to stop the war’: Talks are the only way to resolve Nagorno-Karabakh conflict, Armenian president tells RT 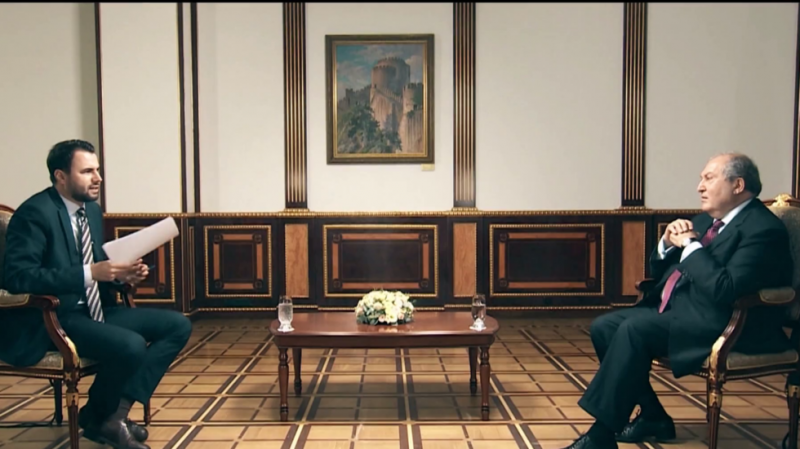 The war between the close neighbors – but bitter historical foes – has “never stopped in Karabakh, even with the ceasefire in 1994,” when Armenia and Azerbaijan signed a peace agreement, Armenian President Armen Sarkissian told RT’s Ilya Petrenko.

Armenia and Azerbaijan could still come to terms on numerous issues, the president stated. Several “differences” were left unresolved after 20 years of talks, but they are “principled ones” and require “political courage and decisions.” Now the progress is ruined, he said, but there is no other way than to return to negotiations.

For the president, the main issue now is to stop the hostilities. The agreed ceasefire took effect on noon Saturday and was meant to allow the belligerents to exchange prisoners of war and evacuate the dead. Now more than ever, flexibility is crucial, the Armenian president said.

Baku and Yerevan negotiated a ceasefire last Friday following over 10 hours of talks mediated by Russian Foreign Minister Sergey Lavrov. Major emphasis was placed on ending the fighting without preconditions, whereas other details of the truce will be “agreed separately,” Lavrov said.

Commenting on Russia’s mediating effort, Sarkissian stated that Moscow is in a unique position, having warm relations with both Azerbaijan and Armenia. While the two sides can equally trust Russia, Moscow itself is taking “a very hard responsibility, the responsibility of being a mediator,” he said.

Right after the ceasefire entered in force, Yerevan and Baku accused each other of breaking the hard-earned humanitarian truce. Azerbaijani officials accused the other side of initiating the cross-border shelling of the city of Ganja, while Armenia pointed to the bombardment of civilian-populated cities and towns within Nagorno-Karabakh.

“The ceasefire is not kept fully and it’s not only my words, it’s the recognition by a lot of international monitors,” according to Sarkissian. But, “if one violates the other one answers.”

To make sure that it is respected, all sides should apply a lot of effort, and a verification mechanism to detect the violator should be put in place. “There are many ways of doing that internationally [or] using technology,” he said.

And that direction is the decision over the final status of Nagorno-Karabakh, which can be made only through “normal human negotiations,” the Armenian president insisted.