Home / WORLD / ‘Time to resist’: Republicans denounce Biden vax mandate as ‘absolutely unconstitutional,’ claim he has ‘ZERO’ authority to do it

‘Time to resist’: Republicans denounce Biden vax mandate as ‘absolutely unconstitutional,’ claim he has ‘ZERO’ authority to do it 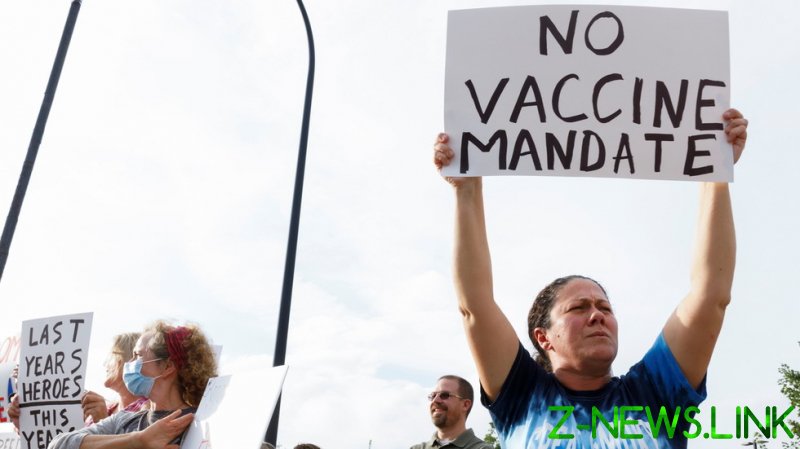 As part of a six-prong “Path out of the Pandemic” first announced by the White House on Thursday, the Occupational Safety and Health Administration (OSHA) and the Department of Labor will enact a rule mandating vaccinations for businesses with 100 or more employees. Biden is also requiring all federal employees and anyone contracting with the government – over 2.5 million people – to be vaccinated, or else.

MSNBC host Stephanie Ruhle described the tactic as “the ultimate work-around” for the government to require vaccinations. Republican lawmakers and pundits, however, immediately denounced it as “illegal” and “unconstitutional,” with some urging private companies to resist and rebel.

“This is absolutely unconstitutional,” tweeted Representative Thomas Massie (R-Kentucky). “OSHA has no more authority to enforce this (there’s no statutory authorization) than CDC had to issue the eviction moratorium. Which is to say they both have ZERO authority to do these things. Congress makes the laws in a constitutional republic.”

“Those businesses should openly rebel against any such rule,” said his colleague Chip Roy (R-Texas).

“He’s demented,” tweeted Blake Masters, a GOP candidate for the US Senate in Arizona, calling the mandate “a wildly disproportionate response… just about power and control.”

Tennessee Republican Robby Starbuck, who is running for Congress in 2022, said it was “time to resist,” and urged GOP legislators, mayors, governors and attorneys general to do so. “Biden’s overreach cannot go unchecked. Now is the time to fight for our voters, freedoms and America,” he tweeted.

“This isn’t a fight against vaccines. This is a fight for whether we have America, or we don’t,” tweeted conservative pundit Tony Katz.

Pundit Candace Owens engaged in a flight of fancy, wondering what would happen if all federal employees “refused to play ball with Dictator Biden” and went on strike. Much of the federal bureaucracy, however, is sympathetic to the Democrats.

Biden campaigned in 2020 on a promise to “shut down the virus” and imposed a mask mandate immediately upon taking office, only for the US to experience a surge of cases over the summer, attributed to the Delta variant of Covid-19. His new plan doubles down on masking, testing and vaccination requirements. According to the White House, its goal is to “reduce the number of unvaccinated Americans by using regulatory powers and other actions to substantially increase the number of Americans covered by vaccination requirements” that will “become dominant in the workplace.”