Home / WORLD / Time to get the checkbook out, Roman? Chelsea linked to Bayern marksman Lewandowski as Tuchel seeks to cure Chelsea’s scoring woes

Time to get the checkbook out, Roman? Chelsea linked to Bayern marksman Lewandowski as Tuchel seeks to cure Chelsea’s scoring woes 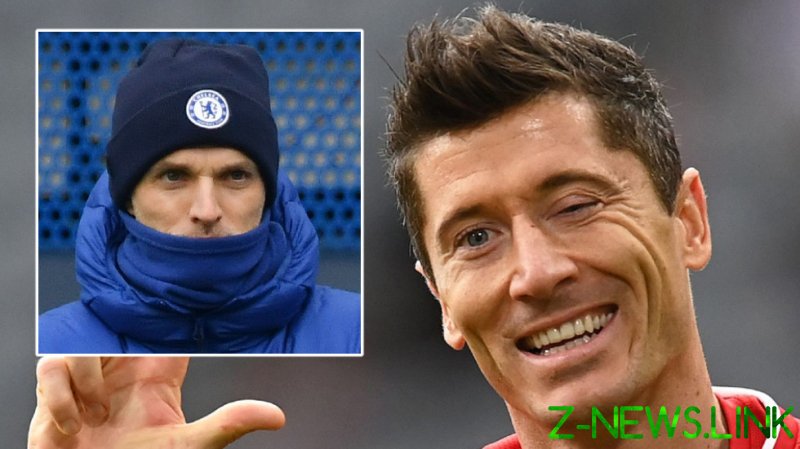 Despite Chelsea occupying third place in the Premier League and advancing to the finals of both the FA Cup and Champions League, there has been something of a famine up front for the Blues with the club’s three recognized forwards – Timo Werner, Tammy Abraham and Olivier Giroud – contributing only 35 goals in all competitions so far this campaign.

A new striker is thought to be top of manager Thomas Tuchel’s shopping list this summer, with names such as Erling Haaland, Romelu Lukaka, Harry Kane and Sergio Aguero mooted.

A candidate from German football who is well-known by Tuchel is understood to be potentially available this summer in the form of Lewandowski.

The Poland striker, who will be 33 in August, is coming off another outstanding season with German champions Bayern Munich, having found the net 47 times in just 39 games this year as part of 293 in 328 games in total in his Bayern career.

According to Sky Germany, Chelsea representatives have made contact with Lewandowski’s camp to sound him out ahead of a potential move as the captain of his national side reportedly considers his future in Bavaria.

Chelsea transfer chief Marina Granovskia may well have her work cut out amid reported interest from Spain in Lewandowski, however. Barcelona are thought to be circling but the La Liga giants’ insecure financial position could pose a stumbling block to any deal.

News of Chelsea’s ambition to bring in another forward will likely give Werner pause for thought but with both Abraham and Giroud expected to leave the club this summer, it doesn’t appear as if drafting Lewandowski in would threaten Werner’s status – particularly after Tuchel praised Werner’s impact since the German took the reins from Frank Lampard in January.

“You will not find one manager who will not add a 20-goal striker to his squad. I cannot have enough of them, if you can guarantee that,” Tuchel said recently.

“But this is what Chelsea bought: they bought Timo Werner and he is a 20 or 30-goal striker a year. Now he is struggling a little bit, for the first time in his career.

“In any transfer, there are risks of adaptations, change of country, change of mentality. It needs time. It’s not a puzzle where you identify one piece and you go out and find the exact piece. It’s more than that and that’s why there is no rush and no panic.”