Home / WORLD / Time for Texit? Texas talks of SECEDING from US, but progressives still don’t see the dangers of their radical, divisive plans

Time for Texit? Texas talks of SECEDING from US, but progressives still don’t see the dangers of their radical, divisive plans 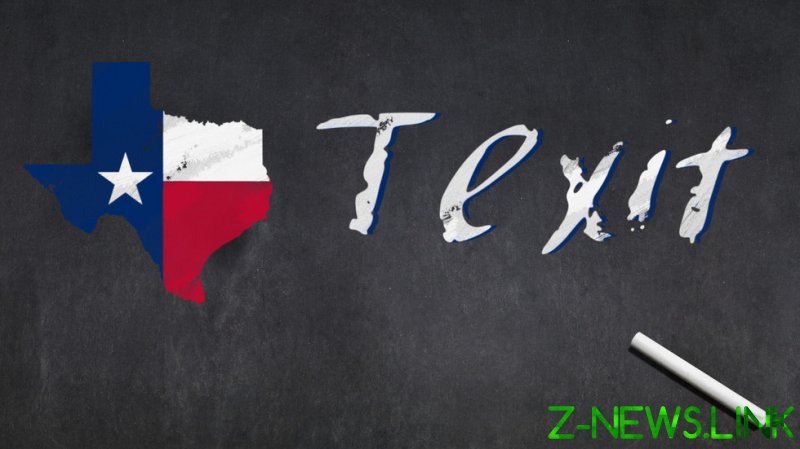 No longer content to see the term ‘parallel realities’ used as just a metaphor to explain America’s intractable standoff between Republicans and Democrats, one Texas representative is now calling for full separation from the American franchise.

Smack in the middle of the most consequential presidential election in US history, Republican Texas lawmaker Kyle Biedermann has vowed to file legislation that will allow Texans a chance to secede from the United States and “reassert its status as an independent nation.”

“The federal government is out of control and does not represent the values of Texans,” Biedermann wrote on his Facebook page. “That is why I am committing to file legislation this session … to give Texans a vote for the State of Texas to reassert its status as an independent nation.”

Tough words from a tough state. It must be noted, however, that the lawmaker’s statement does not single out the Democrats or Joe Biden by name, but rather the “federal government.” By sitting pretty on the fence between the Republican and Democratic camps, Biedermann does not risk alienating members from either party. Not a bad strategy since it’s too late to complain about the government under Trump as it would appear the populist will soon be packing his bags; on the other hand, it is too early to complain about a Biden government since he has yet to set foot in the White House as president. Possibly he was referring to the Supreme Court, which just tossed out a 17-state Texas-led challenge to the Biden-Trump contest, which, nevertheless, still seems up for grabs amid accusations of fraud and corruption.

Whatever the case may be, by conjuring up the spirit of Texas secession, an idea that has been floated on numerous other occasions, Biedermann understands perfectly well that he is appealing to the hearts and minds of conservative Texans who yearn for the ‘golden age’ of America’s past when being liberal meant you were a bra-burning feminist, a tree-hugging environmentalist, or maybe an anti-war pacifist.

Compared to the situation today, those partisan wars of yesteryear seemed somehow logical and understandable to many Americans. At least Republicans and Democrats could still live together under one leaky roof. And no matter how bad things got between the feuding sides, at least there was no shutdown of conversation and dissenting opinion as is the tragic case today, where even college campuses have instituted a weird code of silence. It is a great paradox of our times that when Americans enjoy more diverse means of communication than ever before, Big Tech censorship of social media commentary makes the laboriously handwritten letters sent via postage stamp seem like the best ‘app’ of them all. But I digress.

It is certainly not just Texans who understand what a Biden presidency, heavily influenced by the radical progressive wing of the Democratic Party, means for conservatism. They already got a bitter taste of it while Biden was vice president in the Obama administration for eight long years. In fact, one of Donald Trump’s first acts as president was to repeal Obama’s so-called Toilet Law, which made it legal for biological males to use the bathroom and changing facility that corresponds to the gender they ‘identify’ with, and never mind what women thought about the idea. Unfortunately, however, when it comes to conservatives pushing back against the forces of liberalism, it’s always one step forward and two steps back.

Consider that not even Trump was aware until this year that something known as ‘critical race theory’ – which teaches, among other things that “virtually all White people, regardless of how ‘woke’ they are, contribute to racism” – was being taught to government employees. If that is the sort of thing being taught inside a Republican administration, imagine what is being taught inside a liberal university.

Today, any number of hyper-progressive movements – from transgender studies being taught at the elementary school level, to drag queens reading to groups of children at public libraries, to biological males competing against born females in sport – are challenging traditional conservative thinking at every possible turn. But perhaps no other ‘woke’ idea has the power to annoy Texans more than the Democrat’s pledge to open the border with Mexico to illegals.

The Lone Star State shares 1,254 miles (2,018km) of common border with its Latin American neighbor across the Rio Grande River. So imagine the reaction of many native Texans when they understood that the Democrats not only had little interest in maintaining the viability of the border, but have even said they would phase out the “racist” Immigration and Customs Enforcement (ICE) responsible for protecting Texans against illegal arrivals. Here is where it is a bit easier to understand what Biedermann may have meant by a government described as “out of control and does not represent the values of Texans.”

Who better than the citizens of Texas to protect their border if the federal government refuses to do it? After all, it will be their children, not the children of the distant Washington elite who will be forced to live with the dire consequences of an open border. It’s not so hard to understand the logic of politicians like Biedermann, who are effectively saying: if the federal government will not protect Texans, perhaps Texans should just secede from the Union.

Of course, Texans are under no illusions that it would be next to impossible – short of tremendous bloodshed – for them to simply vote their way to “independence.” After all, it’s been tried before with calamitous results. In 1861, the Lone Star State seceded from the United States and joined the Confederate States of America. Only after the bloodiest war in American history – the so-called Civil War, which is estimated to have killed up to one million soldiers and civilians – was Texas fully readmitted into the Union in 1870.

At the same time, however, Democrats need to wake up to the fact that millions of American conservatives, not just in Texas, are desperately seeking shelter from the ultra-liberal storm that is expected to arrive under a Biden-Harris presidency. It is simply playing with fire for the Democrats to heed the voice of a minuscule number of radical progressives in their party, as opposed to millions of Americans who declare affinity to conservative values.

Unless the United States wishes to see another possible war of secession in its future, it would be wise for the Democratic Party to put the brakes on their pandering to their radical fringe, who will only succeed at blowing up the country with their reckless liberal experiments. Word of advice: when Texas talks secession, Washington better damn well listen.