Home / WORLD / Three and easy: Italy smash Switzerland to extend unbeaten run to 29 games and become first round of 16 team at Euro 2020 (VIDEO)

Three and easy: Italy smash Switzerland to extend unbeaten run to 29 games and become first round of 16 team at Euro 2020 (VIDEO) 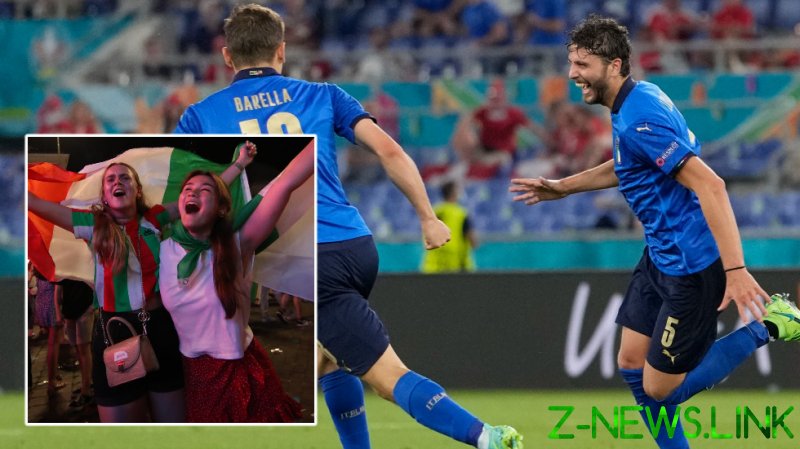 Italy had never scored three goals at the Euro finals before their win against Turkey in their opener on Friday, but they have now repeated the trick to become the first team to qualify for the round of 16 at this year’s tournament with another performance in which they rarely needed to hit top gear.

The Azzurri looked to have gone ahead after 20 minutes when Juventus captain Giorgio Chiellini scored from close range, only for the defender to see the goal disallowed and, shortly afterwards, limp off with a hamstring problem.

Undeterred, Italy went ahead through Manuel Locatelli’s tap in seven minutes later, and the Sassuolo midfielder ensured his side’s dominant performance was reflected in the scoreline by curling in a marvellous long-range strike seven minutes after the break.

A minute before the end, Ciro Immobile provided another contender for goal of the tournament. Where Locatelli’s effort had arrowed into the left-hand corner of Yann Sommer’s net, the Lazio luminary went the other way, planting a deadly finish from similar range beyond the grasp of the goalkeeper to embellish the result.

In an almost unprecedented possibility in modern times, Italy are one match from equaling the country’s record unbeaten run of 30 matches without defeat, set almost 100 years ago.

They are clearly contenders for the Euro title, although they have arguably been in their comfort zone ahead of their closing group match against Wales, having played both of their matches so far on home soil against forgiving opposition.

“We were struggling in the opening minutes, but then we pressed them high and forced them to make mistakes. The lads did really well – it wasn’t easy, their second game in five days and it’s so hot.”

In the other Group A game on Wednesday, a first-half Aaron Ramsey goal and a last-gasp second from Connor Roberts gave Wales their first win, beating Turkey 2-0 to leave them likely to progress to the round of 16.

Gareth Bale was named man of the match despite blasting a penalty over the crossbar after the break.