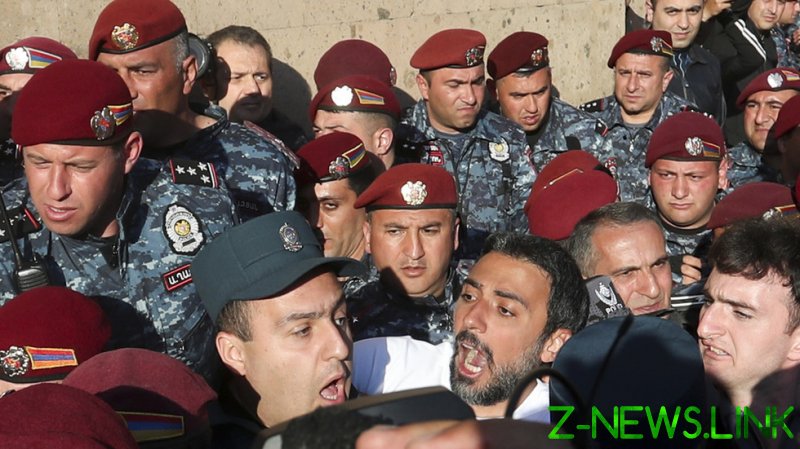 Anti-government protests in Armenia’s capital city of Yerevan continued on Thursday, while the authorities have claimed that outside help is not needed to deal with the unrest.

A campaign to oust Prime Minister Nikol Pashinyan has been ongoing since April 25. The dissatisfaction was prompted by remarks by Pashinyan that many interpreted as displaying a willingness to compromise on the Nagorno-Karabakh issue, even going as far as giving the disputed territory away to Azerbaijan. Armenia and Azerbaijan fought a bloody war over control of the region in 2020, which has seen periodic flare-ups ever since, the most recent being this past March.

Despite numerous arrests, the protesters are determined to continue their action.

“We have started a hard and difficult work together, but be sure that together we will finish this work with a victory, because you are firm, strong and determined, we are united,” a key opposition figure and vice president of the parliament, Ishkhan Saghatelyan, said during a demonstration on France Square in central Yerevan on Wednesday, before inviting everyone back to the streets the next day.

More than 400 people were detained on Wednesday, while on Thursday 73 people have been taken to police stations, Sputnik News reported, citing a law enforcement spokesperson.

These numbers might increase, as protests have also been taking place in the evening. 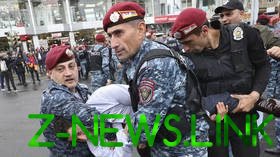 “This is completely false information. In domestic political matters, Pashinyan relies solely on the will of the Armenian people. The organizers of today’s rallies have been exercising their right to hold demonstrations for a month, and control is the responsibility of the Armenian police,” Security Council Secretary Armen Grigoryan said.

He also claimed that the protests had not received broad public support.

Meanwhile, Pashinyan has not been the only target of the protesters’ ire. On Wednesday, Saghatelyan said that the opposition leaders would like to share their vision of the country’s political situation with the US and EU countries’ ambassadors.

“By your silence you contribute to a dictatorship in Armenia,” the National Assembly’s vice president said during a rally, addressing these words to the heads of the diplomatic missions whom he would like to meet.

“Dear ambassadors, representatives of international organizations, put an end to double standards,” he called out to the crowd.

The remarks that initially sparked the unrest came in a recent speech by the prime minister to Parliament in which he said: “Today the international community tells us again ‘lower your benchmark on the status of Nagorno-Karabakh a little and ensure greater international consolidation around Armenia and Artsakh’.”

Otherwise, according to the prime minister, the international community will ask Armenia not to rely on it as it will be unable to help.

Following the widespread criticism, the prime minister’s political allies accused the opposition of using the remarks as a pretext for political games, insisting that Pashinyan does not plan to give away Nagorno-Karabakh.

Yerevan and Baku fought a 44-day-long war in 2020, during which Azerbaijan captured parts of Nagorno-Karabakh, a disputed territory controlled by Armenians since the early 1990s. A Moscow-brokered ceasefire saw Russian peacekeepers deployed to the region.

The situation on the ground has remained tense, however, with both sides accusing each other of provoking hostilities.