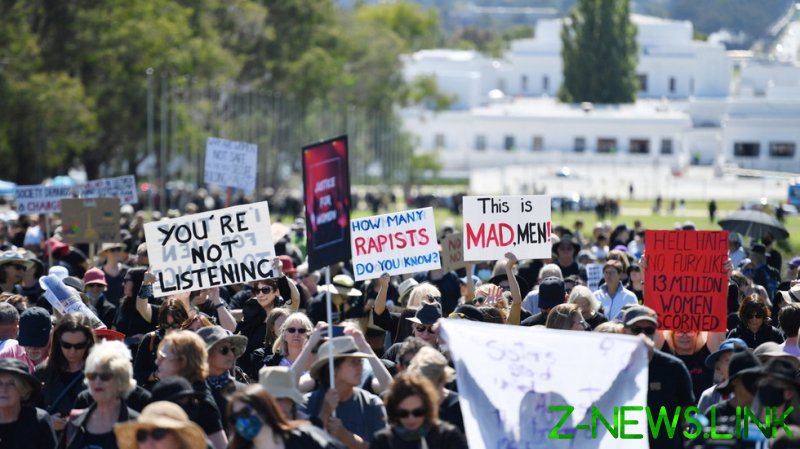 Hundreds of demonstrators flocked to the Parliament House, which also houses the Australian government, including the Prime Minister Scott Morrison office, on Monday, as part of #MarchForJustice campaign against sexual abuse of women.

Attendees carried signs reading “Enough,”“It’s time for men to change”, “Rape Place,” as they stood in the lawn in front of the governemnt building.

Similar scenes played out in front of a Parliament House in Sydney, one of Australia’s largest cities, where police estimated some 6,000 people turned out for the march as of Sunday afternoon.

Protesters marched down the streets of Melbourne. Participants unfolded a giant list with the names of Australian women killed as result of gendered violence since 2008.

The protesters also demanded the sacking of Attorney-General Christian Porter.

Porter has been on medical leave amid allegations that he raped a 16-year-old girl in 1988. The allegations stem from a letter, sent by alleged friends of the woman, who committed suicide last year. Porter squarely denied the allegations. On Monday, the AG filed a defamation lawsuit against Australia’s ABC News broadcaster, accusing its journalist Louise Milligan of smearing his character by reporting the letter last month. The news service said that it would challenge the lawsuit.

The sexual assault allegations against Porter were reported on the back of another rape scandal, that has been gripping the Morrison cabinet for a month. On February 15, former LIberal Party staffer Brittany Higgins claimed that she was raped in Australian Defence Minister Linda Reynolds’s office by a male staffer in 2019. Higgings said that she was heavily drunk from a work party, accusing the man of taking advantage of her state. Higgings alleged that Reynolds failed to support her, claiming that the defence minister wanted to sweep the report under the rug so it does not hurt the party politically. Last Friday, Reynolds publicly apologized to Higgins for calling her a  “lying cow “ in front of other staffers. The minister insisted, however, that her offending remark was misunderstood and did not mean she thought Higgings was lying about the rape.

Higgings was one of the key speakers at a Canberra rally on Sunday. Addressing the crowd in front of the Parliament House, she urged changes to the working atmosphere in the parliament, arguing that “the glass ceiling is still in place, and there are significant failings in the power structures” within the Australian society.