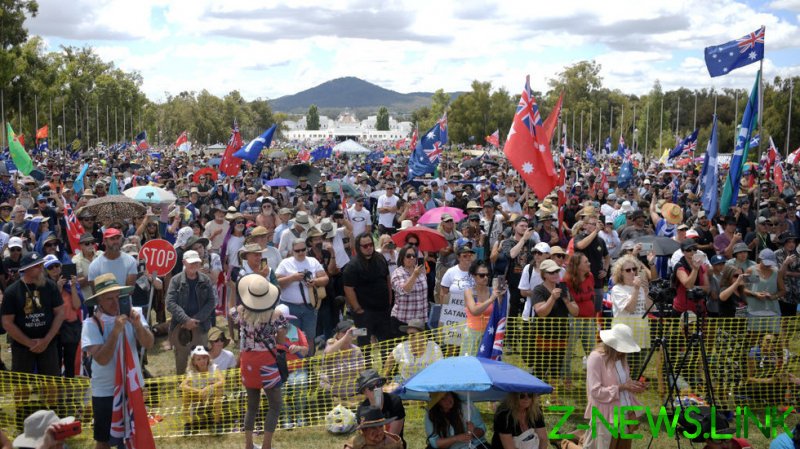 Protesters gathered at Parliament House in the Australian capital, Canberra on Saturday, demanding an end to coronavirus measures. The demonstrators, who arrived by truck, car, and bus over the last week, had camped at a nearby festival ground.

Video footage of the demonstration showed crowds of people streaming into the city and assembling outside parliament. 7News reporter Jennifer Bechwati described the gathering as “one of the biggest protests I’ve ever seen.”

Once outside the Australian legislature, the crowd chanted “sack them all,” referring to Prime Minister Scott Morrison and the state premiers responsible for implementing some of the world’s toughest pandemic-related restrictions. In Victoria, for example, face masks and proof of vaccination are required in most indoor settings and employees in most sectors are required to be vaccinated to work.

At least three people were arrested on Saturday, with one detained for driving his truck through a roadblock. Police said the crowd of around 10,000 was “generally well behaved.”

Pouring into the city over the last week, the protesters had camped in caravans, cars, trucks, and buses at a nearby exhibition ground. Several hours before the protest, they were ordered to clear out by Sunday or risk arrest for trespassing.

Morrison responded to the protest by urging participants to demonstrate in a “peaceful and respectful way.” The Australian leader stated that all vaccine mandates in the country save for some rules for healthcare workers were implemented by state premiers and not his government.

“They have not been put in place by the commonwealth government … so I understand their concerns about these issues,” Morrison said.

According to government figures, 94% of Australians aged 16 and over are fully vaccinated. The Australian Capital Territory, the jurisdiction that encompasses Canberra and its surrounds, is the most vaccinated region in Australia, with more than 99% of the population aged over 16 jabbed.

Some vehicles arriving in Canberra prior to the protest were decorated with flags and the phrase “Convoy to Canberra.” The protest is one of several ‘Freedom Convoys’ loosely inspired by a truckers’ protest in Canada that clogged the streets of Ottawa and blockaded several border crossings between Canada and the US. Protests involving trucks and other vehicles are currently underway in New Zealand and France, with the French protesters expected to join other European truckers and drivers, and converge on Brussels early next week.