Home / WORLD / THOUSANDS of migrant children, some with Covid-19, crowded into Texas facility designed for 250 – reporters on US-Mexico border

THOUSANDS of migrant children, some with Covid-19, crowded into Texas facility designed for 250 – reporters on US-Mexico border 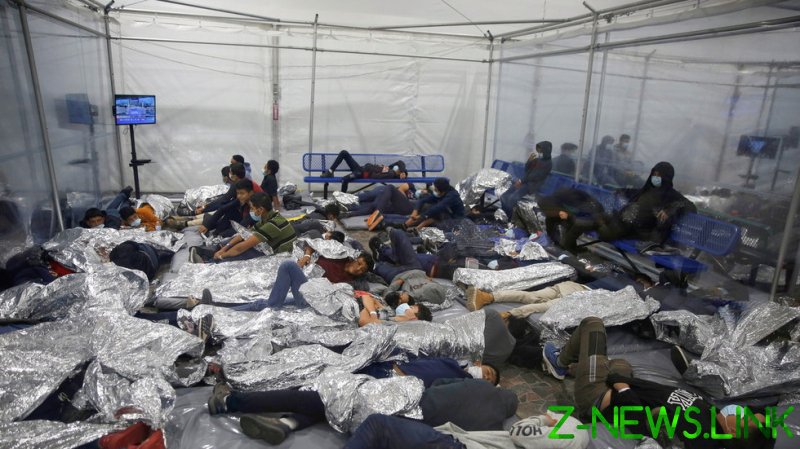 After weeks of refusing all media access, the Biden administration finally allowed two AP journalists and a CBS crew to visit the US Customs and Border Patrol (CBP) detention facility in Donna, Texas on Tuesday. Photos from this very facility were leaked over a week ago – both by a Democrat lawmaker to mainstream media, and a whistleblower to the conservative outlet Project Veritas – showing crowded conditions that have only gotten worse since.

More than 4,100 people, including children and families, were crowded into a facility about 3,200 square feet (297 square meters) in size, designed to house 250 people at most, according to AP.

Eight “pods” were set up inside the tent facility, and “many” had more than 500 children inside. AP described it as “severely overcrowded,” with young children sleeping on mats set up on the floor.

There were 615 children inside a pod the CDC guidelines said ought to hold 32, Nicole Sganga of CBS reported, noting that the Donna facility is “at 1700% pandemic capacity.”

New arrivals were inspected for lice, scabies, fever and other medical conditions, before being given psychological tests by nurses and having their shoelaces removed “to avoid harm to anyone,” according to the AP description of the processing system.

Children 14 and older were fingerprinted and photographed, but the younger ones were not. The arrivals were given bracelets with a barcode showing their medical and hygiene history.

No Covid-19 tests were given “unless a child showed symptoms,” AP reported. However, the CBS crew counted “more than 50 [Covid] positive (and largely asymptomatic) kids” waiting for a quarantine bus.

The Donna tent facility is located on the border itself, in the Rio Grande Valley. The Biden administration has been expanding detention facilities on both the border and in the interior of the US, run by the Health and Human Services (HHS) Department – including some at Fort Bliss, a military base in El Paso.

More than 1,200 migrants at Donna have been processed and are waiting to be transferred elsewhere, but HHS has nowhere to put them, CBP officials told reporters. At least 39 unaccompanied children have been at Donna for more than 15 days, according to Oscar Escamilla, acting executive officer for the Rio Grande Valley Operational Programs Division.

Escamilla told CBS it cost $6.1 million to set up the processing facility, and should cost about that much to run it per month – but it’s so overcrowded that the actual cost is $16 million.

Deputy Chief of Border Patrol Raul Ortiz told reporters that CBP is now seeing “self-separation” among families deported from the US for entering illegally. Parents are sending children across the border alone, so they can apply for asylum.

CBP expects “more than one million encounters” with migrants by the end of September 2021, Ortiz added.

In his first press conference last week President Joe Biden insisted the migrants aren’t coming to the US because he revoked the policies of his predecessor Donald Trump, and said he would “make no apology” for doing so. He argued the Central Americans that began trekking north soon after he was declared winner of the 2020 presidential election – some wearing ‘Biden please let us in’ shirts – were really driven by poverty, crime and even natural disasters.

Vice President Kamala Harris has been tasked with overseeing the administration’s strategy of dealing with the migrant tide, which Biden also insisted was seasonal and not at all different from what happened under Trump.

According to the conservative-leaning Washington Examiner, however, the current tide of migrants has already surpassed the high points in 2018 and 2019 – before Mexico deployed troops and Trump began construction of the border wall.

With the Biden administration adamant about allowing asylum-seekers on “humane” grounds, there is no indication the pace of arrivals will slow down or end any time soon.