Thousands of Catholics gathered for a prayer at the Polish border 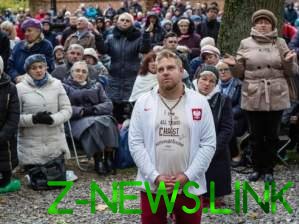 An unusual event occurred in the life of the Catholic Church.

In Poland on Saturday, a so-called day of prayer, which was attended by tens of thousands of Catholics.

“They were encouraged to gather in pre-designated areas on the borders of the country together to pray for the salvation of Poland and of the whole Christian world”, – stated in the message.

The leadership of the Church claims that this event is purely religious in character, but there are concerns that the way the Church blesses the refusal of the Polish authorities to admit into the country of Muslim migrants.

A day of prayer dedicated to the anniversary of the victory over the Ottoman Turks in the naval battle of Lepanto in 1571.

To set aside for prayer areas on the borders of buses brought thousands of believers from more than 300 Catholic parishes throughout Poland.
Worshipers lined up in long rows in the fields, on the streets and on the Baltic beaches.