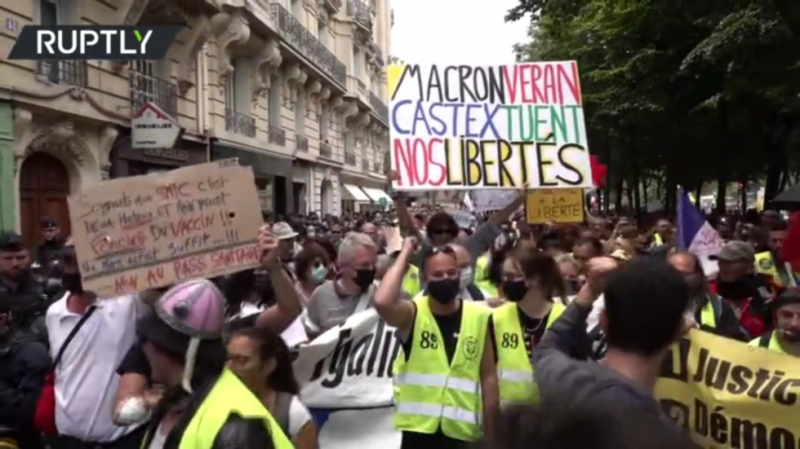 Huge crowds turned out in Paris on Saturday as riot police attempted to corral the seemingly endless columns of protesters filling the capital’s main thoroughfares. Drumming, chanting and exploding firecrackers could be heard in a Ruptly livestream of the massive demonstration. The protesters could be heard shouting “Liberty!” as they snaked their way through the city’s streets.

At one point, scuffles broke out and police deployed tear gas as law enforcement found themselves nearly surrounded by mobs of Parisians.

Dozens of other events were reportedly held in other parts of the country.

Social media filled up with footage allegedly taken in the small city of Pau, located in southwestern France. Despite the city’s modest size, its streets were swarmed by demonstrators who turned out to express their disapproval with President Emmanuel Macron’s so-called “Green Pass.”

Other large turnouts were reported in cities and towns across the country, including in France’s overseas territories.

Starting from August 9, French citizens will need a government-issued digital health pass in order to go inside a cafe or use certain forms of public transport. Individuals will need the ID to show that they are fully vaccinated, have tested negative for Covid-19, or have recovered from the virus. The controversial legislation also makes vaccination compulsory for healthcare workers.

Since July 21, the Covid pass has been obligatory in order to visit museums, cinemas and other cultural venues with a capacity of more than 50 individuals.

Following large-scale protests earlier this month, the French government made several concessions to the draconian rules, including lowering fines for violating the ID regime and pushing back when the policy would come into force at shopping malls.

Last week, Macron seemed to dismiss those who opposed the coercive measures as irresponsible and selfish, arguing that refusing to be vaccinated with the experimental jab would end up killing people.