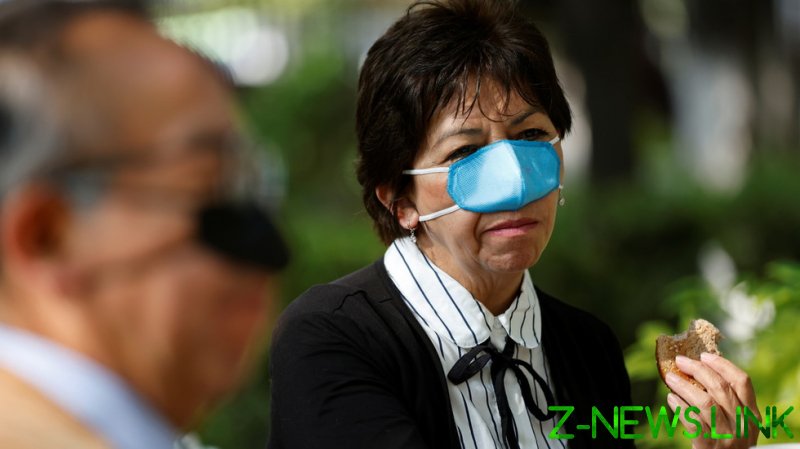 Restaurant patrons thoughtlessly breathing out while unmasked have long been the bane of the restaurant owner’s existence, preventing the once-lucrative establishments from returning to their status as the social hubs they were once considered prior to the onset of the ‘new normal.’

But with the arrival of Covid-19, no face mask was considered protective enough – stores even posted signs on their walls warning against the use of masks with ‘vents,’ small circular outlets that allow the release of built-up carbon dioxide from inside the mask, preventing the wearer from falling victim to hypercapnia, a condition caused by the inhalation of too much carbon dioxide.

A pair of Mexican scientists appear to have “solved” the problem in a clip posted to CBS on Thursday. Each researcher sported two masks, leaving one on over their nose the entire time as they removed the larger, lower mask to drink from cups and eat sandwiches.

A handful of the social media users responding to the mini-mask praised the couple in the video, declaring they “love[d] it when people have the absolute self-confidence to do something useful and caring without regard for personal appearance” – putting others’ well-being over their own sense of shame.

Except the mask came unaccompanied by any iota of data indicating the new design would protect anyone – wearer or onlookers – from the outbreak.

Indeed, most viewers seemed to take it quite seriously, offering the researchers advice on how to market their hot new design.

Ironically, some even observed that “ignorant people won’t put on a regular mask again after eating/drinking,” implying all the smart ones would be rushing to purchase the hot new trend for the summer, for no reason other than its trendiness – despite any functionality remaining for now in the realm of the imagination.

Others mocked the ‘face bikini,’ in both style and substance, observing that a seemingly endless line of intimate apparel-as-PPE possibilities could make someone rich – or sick.

And some suggested maybe it was time for humanity to throw in the towel after all if they were seriously tying mini-masks onto their noses to save them from what many argued was a slight case of the sniffles.

The real problem, as one user noted, was that the nose-mask “dramatically increases the risk of collapsing into hysterical laughter and choking to death on your food.”