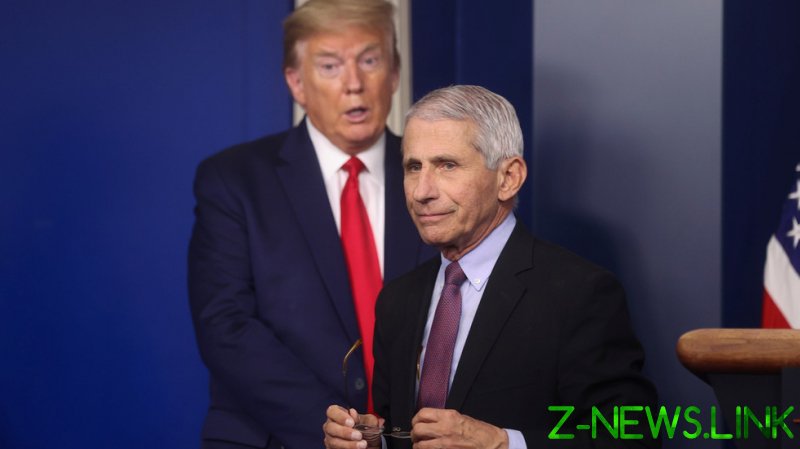 As the US passed 20 million recorded cases of Covid-19 and 350,000 deaths linked to the virus, President Donald Trump took aim at the Centers for Disease Control and Prevention (CDC) on Sunday, accusing it of exaggerating the US’ caseload by using a “ridiculous method of determination compared to other countries.”

“The numbers are real,” he said. “All you need to do…is to go into the trenches, go into the hospitals, go into the intensive care units and see what is happening. Those are real numbers, real people and real deaths.”

Trump’s relationship with Fauci has at times been testy, with the disease doctor throwing cold water on Trump’s optimistic predictions throughout the pandemic – like in February, when he called Trump’s forecast that the disease would wane by April “unlikely,” and when he downplayed Trump’s promotion of Hydroxychloroquine as a potential “game changer” treatment.

Despite Fauci and Trump working toward the same end-goals, the doctor’s tempered tone – and likely his willingness to criticize Trump – has earned him glowing media coverage, and fawning praise from Democrats, including Washington DC Mayor Muriel Bowser, who proclaimed Christmas Eve ‘Dr. Anthony Fauci Day’ in honor of his 80th birthday.

Trump, on the other hand, is still despised by most mainstream media outlets. After Fauci’s appearance on ‘Meet the Press,’ the president raged at the apparent bias in a follow-up tweet.

“Something how Dr. Fauci is revered by the LameStream Media as such a great professional, having done, they say, such an incredible job, yet he works for me and the Trump Administration, and I am in no way given any credit for my work. Gee, could this just be more Fake News??,” he wrote.

Trump first accused his opponents of “politicizing” the pandemic back in February, two weeks after his ban on incoming flights from China was called “xenophobic” by Democrats, including incoming president Joe Biden.

Since that time, both sides of the political aisle have differed hugely in their attitudes to the novel coronavirus. Democrats and liberals in general overwhelmingly support mask mandates and business shutdowns, while opposition to mask-wearing is almost exclusively a conservative position. Likewise, 82 percent of Biden voters considered Covid-19 a “very important” issue in the runup to November’s presidential election, compared to just 24 percent of Trump voters, according to a Pew Research poll.

That divide was alive and well online on Sunday, with journalists, liberals and anti-Trump Republicans left aghast by Trump’s supposed “insult to the doctors and nurses who work every day treating Covid patients.”

Barring the most unlikely of long shots, Trump will leave office in just over two weeks. How Joe Biden manages to make good on his promise to “unite” Americans so deeply divided by something as apolitical as a virus, however, is anyone’s guess.