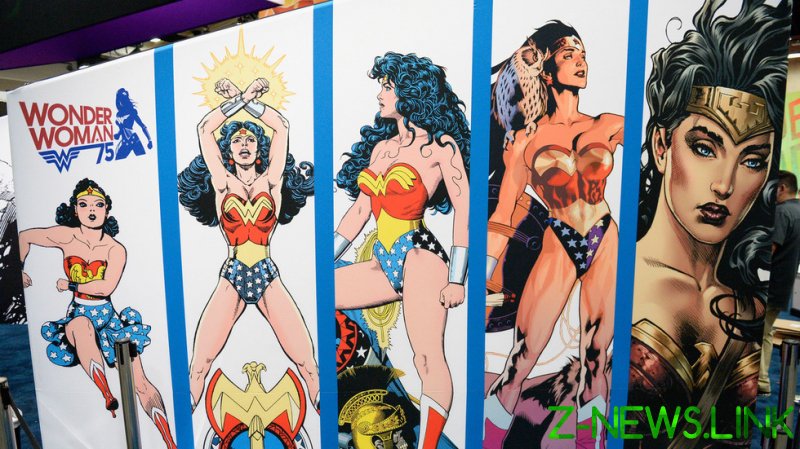 The image exemplifies everything the comic-book industry has succumbed to in recent years – the latest example in an ongoing trend of agenda-driven identity politics, in which classic themes of heroism and sacrifice have been superseded by themes of diversity and inclusivity and the avoidance of anything that could be interpreted as problematic.

Set against a background of garish sunset hues, the Wonder Woman in this new cover has an ambiguous but diversity-approved skin-tone, barely-distinguishable lumps for breasts, and brunette hair that seems to encompass an entire constellation, but which vaguely evokes a heavy speckling of dandruff.

In place of a dynamic flowing costume, her ensemble consists of an orange boob-tube and the kind of mom-jeans worn by middle-aged mid-western chicks at Shania Twain concerts. In a spirit of body-positivity, her thighs have been rendered so large it is as if the performer Lizzo had spent the entirety of quarantine bingeing on deep-fried Mars Bars and eschewed any fitness regime beyond schlepping between the fridge and the couch.

Indeed, the only “wondrous” thing about this iteration of Wonder Woman is the fact she was able to persevere in searching out a “specialist” clothing retailer which stocked jeans in size quintuple-XL.

The artist, Robin Eisenberg (whose other work has been described as akin to soft-porn, and features females with three breasts engaged in sex with other women), explained her creative choices in an Instagram post: “Recently I was asked to create a piece inspired by Wonder Woman, in my own style, for an upcoming one-off artist collab. I love drawing aliens with realistic body types, living their lives, comfortable with themselves. So, I drew an alien character with a realistic body, wearing a more everyday version of the Wonder Woman outfit.”

First of all, why would there be any ideal correlation between aliens and realistic body types? Do we expect aliens to be relatable, body-conscious role-models in the crusade against fat-shaming? And is this a “realistic” body? Even Sir Mix-a-lot, composer of “Baby’s Got Back”, would think this was over-doing it.

As for the notion of “a more realistic version of the Wonder Woman outfit,” that can be realised by visiting Comic-Con and feasting your eyes on nerdy plus-size fan-girls who couldn’t tailor a half-decent approximation of the costume on a shoe-string budget. Comic book characters are meant to be more than human, admirable, not representative, relatable and homogenized so that no one can be offended.

Naturally, Twitter went to work, lampooning the image in every way imaginable. One poster wondered whether Wonder Woman had given up fighting evil and decided to battle ice cream instead.

A succession of illustrators and graphic artists posted semi-genuine, semi-sarcastic reinterpretations of the variant cover. Some were even more slovenly than the original; others were mega-breasted and thunder-thighed parodies; yet more were hilariously trampish.

All this follows a recent trend of agenda-driven identity politics, diversity and inclusivity in comics. Marvel produced the “New Warriors” early this year, with new characters called ‘Safe-Space’ and his non-binary twin-sibling, ‘Snowflake.’ Later, DC produced a graphic novel, Gotham High, which took the lore of Batman and bastardized it into a high-school drama featuring a teenage Bruce Wayne, whose butler, Alfred, is married to a Southeast Asian man.

The only solace we might take from such an image as the new Wonder Woman is the hope that this is as bad as it can get, a high-water mark for identity politics in entertainment. Until then, social media solidarity is all we have.