Home / WORLD / ‘This is totalitarianism’: Doctor ejected from his US hospital for not being jabbed vows to keep fighting for medical freedom

‘This is totalitarianism’: Doctor ejected from his US hospital for not being jabbed vows to keep fighting for medical freedom 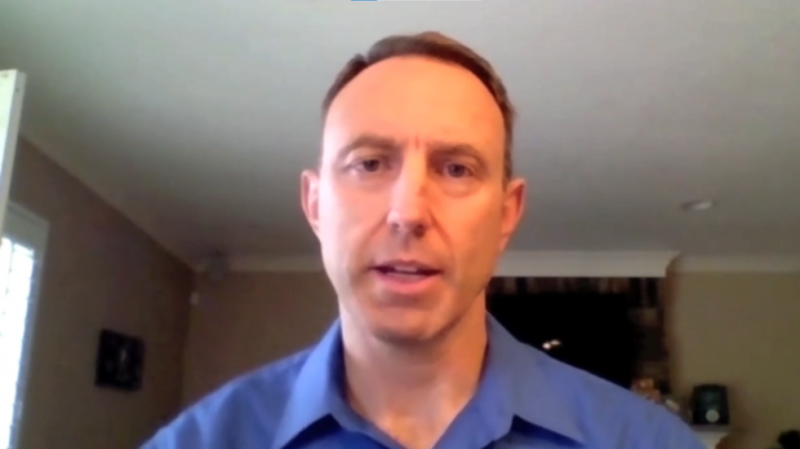 “This is totalitarianism. I’ve come out and said, ‘No, you’re not going to do that, not on my watch’… I’m willing to give my life to this cause.”

These words prove just how divided America is.

They belong to Doctor Rake, an anesthesiologist at the prestigious University of California, Los Angeles (UCLA) hospital. A video of him being escorted by security guards out of the hospital because he is unvaccinated against Covid-19 went viral last week.

California has mandated that all healthcare workers must be vaccinated, otherwise, they will lose their jobs. The cut-off was October 1 and Dr. Rake was later that day sent an email stating that, from October 4, he would be placed on unpaid administrative leave.

The doctor, who has been qualified for 16 years and worked at UCLA for 11 years, treated it as a normal working day. “Next thing I know the chair of my department showed up with two security guys, and they walked me out of the building,” he tells me. “You probably couldn’t tell from the video, but I was some of the most nervous I’ve ever been in my whole life, my legs were shaking. I was going down the stairs and I could hardly keep my legs underneath me. I was so in shock, a place I love and a job I’ve committed my life to, they are just walking me out for being unvaccinated.”

It was initially focused on opposing mandatory flu jabs, but morphed into focusing on Covid-19. So his stance was not news to his employers. “I was vocal and public about my opposition to mandating medical procedures,” Dr. Rake explains. “Our group is not anti-vaccine, we have some vaccinated people… our group is pro-medical freedom, ‘your body, your choice’, ‘my body, my choice’.”

What sets Dr. Rake, 47, apart from many unhappy about vaccine mandates is that he is an experienced doctor at a well-known and respected hospital. He also has a master’s in Public Health.

The issue is clear to him: “It’s violating medical ethics and to me, as a physician, this is the greatest problem I see. I just can’t believe more physicians aren’t speaking out against it. How can you tell me that I can’t force another individual to do what I want as a physician, but you, my employer, UCLA, are going to force me to?”

It’s a scientific fact that vaccines have cured diseases and improved public health, but that’s not the issue.

“I’m not anti-vaccine, I’m just anti this one,” he insists. “Vaccination cured smallpox and cured polio, but because of the totalitarian issues I’m seeing arise from the implementation, how the government has taken advantage of this situation, my thinking on vaccination has changed more towards medical freedom. Despite any appeal to the collective good, you still shouldn’t be able to force people.”

“Let’s say this injection took away 100% of human disease and they said, ‘You’re the last hold out, you’ve got to take this vaccine’. I’d say that guy has the right and individual freedom, even if 8 billion other people have taken it already, to not take that injection. That’s my position, I know some people will call that radical, but that’s what America was founded on. The Constitution didn’t grant anyone rights, in the Declaration of Independence they acknowledged we already have these rights and they are given by God, not by governments.”

There are two branches to Dr. Rake’s strong view why forced vaccinations cannot be tolerated.

The first is a legal one. It’s his belief that US law, under the federal code of regulations governing the administration of drugs – specifically Title 21, section 360bbb – prohibits mandating emergency treatments such as the Covid19 vaccinations: “It’s illegal by federal law in the United States to force somebody to take a EUA [Emergency Use Authorization] product; our state is violating federal law, they are violating the Nuremberg code that says your can’t force people to take treatments.”

In America, vaccines such as the Moderna and Johnson & Johnson ones are approved under emergency use, while only Pfizer’s has full Food and Drug Administration (FDA) approval, which it received in August. This is despite the other vaccines being used successfully by many other countries.

Dr. Rake’s second strike against the mandates is a medical one: he feels the nature of Covid-19 means we don’t have an effective vaccine of a high enough standard.

He explains: “You can vaccinate a population with a monovalent vaccine in the middle of a pandemic with an animal reservoir. Monovalent means you’re only vaccinated against one of the proteins on the surface of the virus. In the middle of the pandemic [when] transmission is high… each time it goes back and forth between animals and humans, it mutates, it’s very easy.

“This is why we could get rid of smallpox and polio, but you can’t get rid of coronavirus, flu and all those others that have an animal reservoir.”

The other element of the growing chasm over Covid-19 in America is related to social beliefs. The US has a constitution, unlike some other nations, so its citizens have a basis to challenge government actions.

It’s this area that affords Dr Rake the greatest support, “We have the Constitution and our administration is just trampling on it,” he warns. “My grandfather was shot down in a B-24 Liberator [in WWII], landed in Sweden safely and got home, fortunately. But had [he and others] not been willing to stand up for freedom, risk their lives, we wouldn’t be here. Hitler would have been in power and he would have conquered the world. The arms we’ve fighting with [today] are words, actions and boldness. It’s a political and ideological war. I think there’s enough of us who believe in freedom who can push them back.”

The toll all this is taking on Dr. Rake’s life is harsh, however. Currently he has no income and his wife, also a physician, is finding it tough as many of her colleagues are angry at her husband’s public protestations. The couple and their three children are settled in California and have no plans to leave.

“I feel pretty well hated at UCLA, but very well loved around the world,” says Dr. Rake. “I’m getting messages, phone calls, emails, people saying, ‘Thank you for standing up for us, the little guy.’”

What does he believe the future holds for him?

“I have a thick skin, even if I went back to UCLA, which I’m open to, I don’t hold anything against the people that hate me. I love all those people, I admire and respect them, I want to save UCLA, that’s my point. I don’t like what the current administration is doing to the UCLA that I know. The lawyers and the administration in the past would not have treated me like this.”

However, unless the mandate is dropped, which seems unlikely, then Dr. Rake’s medical career may be over, with his only option being to practice telemedicine. He wonders if he should devote more attention to developing opportunities related to CUFF.

“I’m a Christian so I believe Jesus risked his life for my freedom. So how could I say to my Lord, it’s great that you died for me and my freedom, but I’m not willing to risk a job? That makes no sense. I’m not going to squander the inheritance of liberty that I got from my forefathers and leave my kids penniless when it comes to liberty.”

For Dr. Rake, how the American authorities and others are proceeding is illogical. “The argument that we’re going to assume everybody is sick and treat them like that first – put a mask on me, distance me, tell me you have to jab me and test me.

“Why don’t want we do that for any other disease? Why don’t we do that for tuberculosis, for example? A very contagious disease [that]kills 1.5 million to 1.7 million people per year. This is turning medicine and ethics on its head: it’s assuming we’re sick without evidence to back that up. You now have to prove your innocence in a sense, [but] we’ve never done that with diseases.”