Home / WORLD / ‘This is pressure’: Fans feel for Djokovic as star IN TEARS before losing bid for historic Grand Slam against Medvedev (VIDEO)

‘This is pressure’: Fans feel for Djokovic as star IN TEARS before losing bid for historic Grand Slam against Medvedev (VIDEO) 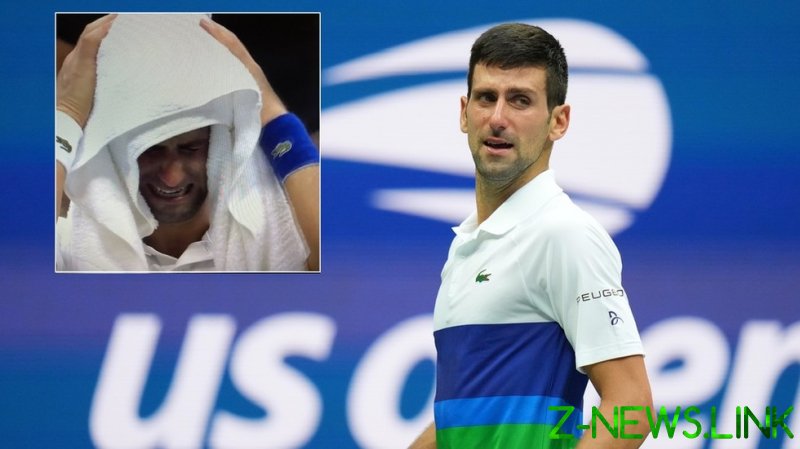 Djokovic, 34, had been aiming to become the first person since Rod Laver in 1969 to win a historic calendar Grand Slam as he eyed a record 21st major title in total, which would have broken his three-way tie with generational rivals Rafael Nadal and Roger Federer in their tussle for outright GOAT status.

But Djokovic was confronted with an inspired Medvedev on Arthur Ashe Stadium as the big Russian’s flawless serving and heavy-hitting consigned his rival to a straight-sets defeat.

In stopping Djokovic, Medvedev made his own slice of history, winning a Grand Slam singles final at the third attempt and becoming the first Russian man to do so since Marat Safin in 2005.

Such was Medvedev’s dominance in New York, he handed Djokovic little chance of gaining any kind of foothold in the match.

Djokovic’s frustrations boiled over at times – including with a racket-smashing outburst in the second set and a potential follow-up later on before he thought better of it with a ball girl in close range.

Those flashes of anger summed up Medvedev’s domination, but there was an unlikely glimpse of a comeback when the Russian fluffed his first attempt at serving for the match, handing Djokovic a lifeline at 3-5 in the third set

The Serbian world number one held serve to edge to 4-5, but still needed one more break to level up in the set.

Receiving fervent support from the crowd as the players took their seats between the change of ends, Djokovic was unable to contain his emotions and was seen breaking into tears as he covered his head with a towel.

Djokovic was still red-eyed as he rose from his seat to face the Medvedev serve, but was unable to stop the inevitable as the 25-year-old Russian saw out the match and picked up a maiden Grand Slam title.

Online, there was sympathy for Djokovic from fans – with some claiming the pressure had finally taken its toll.

It was also noted that Djokovic’s tilt at history in attempting to win Olympic gold in Japan had also fallen short – in that case in the semi-finals – before he suffered more agony in his quest for a calendar Slam in New York.

“A much needed release from what we can only imagine was a mountain of pressure to win Olympic gold & the Grand Slam. Both slipped through his fingers. He experiences so much success. This is real pain. Feel for him,” said tennis figure Craig O’Shannessy.

A minority, however, appeared less inclined to sympathize with Djokovic and pointed to the Serb’s previous words about living with pressure when you are at the top.

In his post-match interview, Djokovic graciously congratulated Medvedev on his success before pointing to the reaction from the crowd as perhaps being behind his outpouring of emotions towards the end of the match.

“You guys touched my soul, I never felt like this in New York. I love you guys, thank you so much for the support, everything you have done tonight for me. I love you and I’ll see you soon,” said the Serb, who was aiming for a fourth title at Flushing Meadows.

Despite his ongoing battle with Nadal and Federer for an outright record Grand Slam haul, Djokovic is often perceived as being less popular among fans than his peers.

That seemed to shift dramatically in New York on Sunday, as Djokovic was given fervent backing from a crowd including the likes of Brad Pitt, Ben Stiller, and other assorted Hollywood royalty and dignitaries.

After collapsing onto the court at sealing the title, Medvedev rose to his feet to embrace Djokovic at the net, and even seemed to gesture to his team in the stands to tone down their celebrations, perhaps out of respect for the Serbian legend.

“First of all, sorry for you the fans and Novak. We all know what he was going for today…,” Medvedev told the crowd.

“What you have accomplished this year and throughout your career, for me, I have never said this before, you are the greatest tennis player in the history.”

Such is his remarkable condition and stamina, Djokovic will surely come again with his bid for a record Grand Slam next year – but for now, the dream is on ice thanks to the brilliance of Medvedev.