Home / WORLD / ‘This is not normal’: Jen Psaki blasted for suggesting UK PM blindsided White House by taking questions from the media 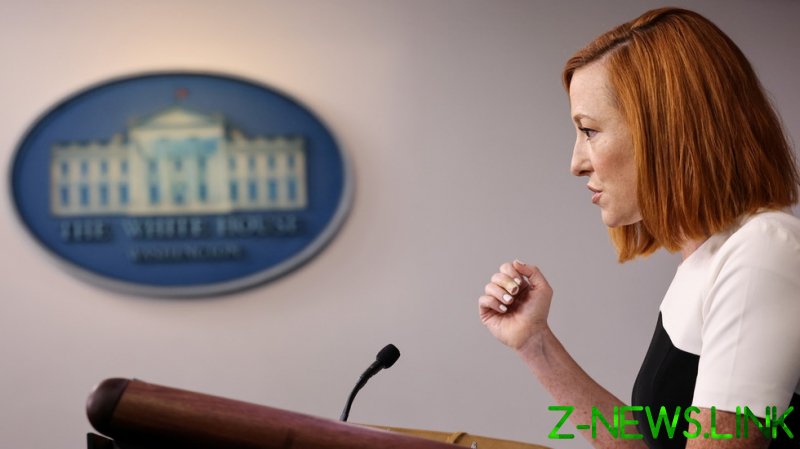 On Wednesday evening, CBS journalist Ed O’Keefe asked White House Press Secretary Jen Psaki to explain an incident on Tuesday which saw journalists escorted out of the Oval Office as British Prime Minister Boris Johnson and US President Joe Biden discussed pertinent issues in front of the press. The leaders met for the first time in the White House during Johnson’s visit to the US for the UN General Assembly, amid Britain’s demands for a trade deal with America.

As O’Keefe noted, Johnson was able to call on the UK press corps to ask him two questions, but the media was swiftly ushered out the room before anyone could put a question directly to the president.

Psaki’s team could be heard shouting “Thank you” and asking the media to leave while Biden seemingly answered a question, although his response could not be heard.

Psaki responded to O’Keefe, first by stating that the relationship between the US and UK was very strong and that “we will be able to move beyond this,” before suggesting that the British leader had blindsided her. “He called on individuals from his press corps without alerting us to that intention in advance,” she stated.

However, Psaki’s admission that she was seemingly unhappy with Johnson for talking freely with the British press haven’t gone down well. In a widely shared tweet, radio and TV host Dana Loesch simply wrote “This is not normal” as she posted footage of Psaki’s press conference.

Many on social media appeared to agree with Loesch and were keen to point out that Psaki’s behavior was both unusual and even offensive to the British. One person asked why a “competent adult” would need to get permission from a US press secretary before speaking to the media in front of him.

“Seems to me as a head of state he didn’t need your permission,” another Twitter user wrote, addressing Psaki herself, wondering whether she intended to further disrespect the British leader.

One person even contended that the White House should be apologizing to both the prime minister and the press.

The Daily Mirror’s Political Editor Pippa Crerar was among those unimpressed by the White House staff. “White House colleagues might be interested to know the British press thought aides shouting was totally out of order. An unwelcome lack of accountability…” she tweeted in the early hours of Wednesday morning.

It was also noted that Johnson is familiar with taking questions, notably every Wednesday when he is questioned in Parliament by members of the house. “It’s the norm for leaders to answer questions, Joe is the exception,” they wrote, referring to the criticism that Biden has not been questioned or faced the press enough during his administration.

Some people weren’t so critical. One person tweeted that they couldn’t see what the problem was.

Meanwhile, Lalit K Jha, a member of the foreign pool who was in the Oval Office, contended that Johnson had surprised a few by allowing the questions. “This rarely happens,” he wrote.

It has been reported that the White House press pool went immediately to Psaki’s office after the Oval Office meeting to file a formal complaint. At the time, she brushed off the criticism, reportedly claiming she was “unaware of the incident.”