Home / WORLD / ‘This is Nazi Germany!’: Airline faces calls for boycott after Jewish family booted from flight over mask-less BABY 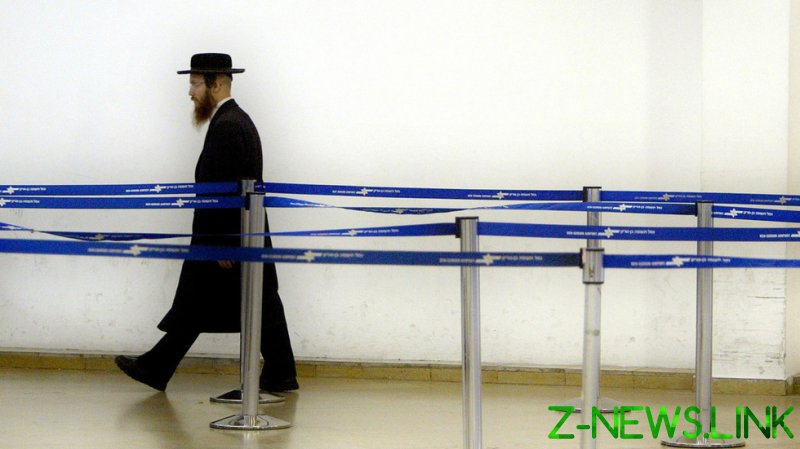 In a series of videos that were posted to Twitter on Sunday, the family could be seen making its way off the Frontier Airlines flight as other passengers shouted, “This is Nazi Germany!” and “This is gonna go all over the news!”

According to the US-based Orthodox Jewish Public Affairs Council (OJPAC), Frontier Airlines staff told the passengers “to get off because their 18-month-old had no mask.” After other passengers started arguing over the incident, the airline staff allegedly ordered everyone else off the plane and eventually canceled the flight.

Eyewitnesses claimed they could see flight staff “high-fiving each other” and making celebratory remarks after the family was kicked off the plane. A man who recorded the incident alleged he could hear staff saying, “A job well done to those Jews.”

Frontier Airlines, however, denied claims that it had kicked the family off the flight because the child wasn’t wearing a mask.

“Members of a large group, including adults, refused to wear masks as flight 2878 was preparing for departure from MIA-LGA. Repeated requests to comply with federal law necessitated their removal from the flight,” the airline declared in a statement, adding, “The issue did not stem from a child under 2.”

One woman who was on the plane, however, said that she saw the two adults in the family come aboard with masks on, while another passenger said they’d also seen the couple wearing masks. The couple were recorded wearing their masks as they vacated the plane, while their child was maskless.

Contradicting the airline’s statement, a Twitter user who claimed to be on the plane also said that “no adult refused to wear a mask.”

“The only person w/o a mask was a 18 month old. I’m still horrified how you handled it,” they commented.

According to its policy, Frontier Airlines permits children under the age of two to go maskless on its flights.

Other social media users called for a boycott of Frontier Airlines following the incident, with one user commenting, “This is a tough situation for the airline, but either multiple employees are lying, or almost an entire plane of passengers.”

“The airplane was loaded corner to corner with ZERO distancing, and for most of the flight many passengers would anyway not wear masks due to eating,” tweeted political commenter Yossi Gestetner. “So it’s odd that you chose to cancel a flight over an alleged mask issue (not backed by video and disputed by eyewitnesses).”