‘This is insanity’: UFC star Ladd shakes violently on scales at weigh-in before fight canceled amid widespread concern (VIDEO) 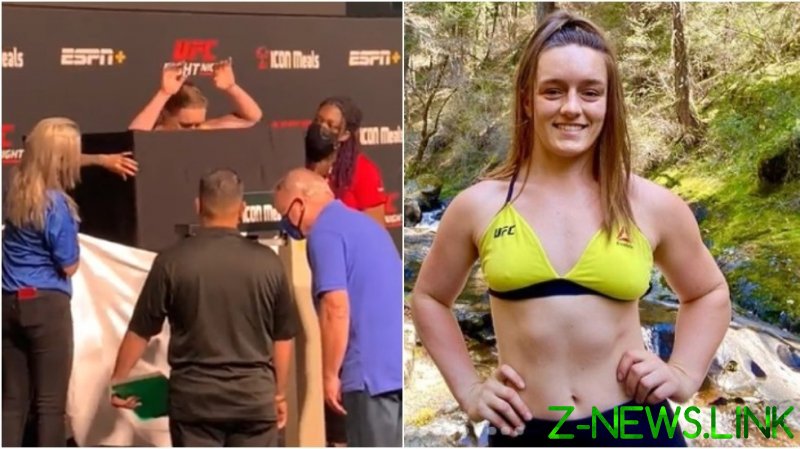 Currently number 10 in the women’s pound-for-pound rankings and number three in her division, 9-1 Ladd was scheduled to take on 8-1 Macy Chiasson on a UFC Fight Night card in Las Vegas headlined by Thiago Santos and Johnny Walker.

Attending the weigh-in, however, the 26-year-old had to strip down while attempting to make the 135-pound limit, and first came in at 141.5.

Covered by boarding to hide her modesty, the Folsom, California native was then described as “looking weak” and seen shaking and stumbling in disturbing footage when asked to lift her arms.

In an indicator of a brutal weight cut, she was evidently lucky not to pass out.

An MMA pundit said that Ladd was on the scales for “three-to-four” minutes in total and the best she could do in the end was 137lbs.

But voices such as Ariel Helwani called for the bout to be scrapped altogether.

“Aspen Ladd should not fight tomorrow. That was extremely troubling. Common sense has to prevail here. What in the world,” the Canadian wrote on Twitter, later adding: “Look at her shaking! This is insanity.”

“They CANNOT let Aspen Ladd fight tomorrow after being in this bad of shape at weigh-ins. Dear lord,” said another onlooker.

Around an hour after the disturbing scenes played out, officials heeded those demands with the clash being shelved.

But those with good memories reminded us how this isn’t the first time that Ladd has struggled to make weight.

“Had to check the date on this tweet to make sure this was today and not footage of the last time we saw Ladd in a scary situation on the scale. This sh*t is hard to watch, especially when it starts to feel habitual,” said ex-The Athletic scribe Ben Fowlkes.

That “last time” occurred in 2019, when Ladd labored to make the limit and was then knocked out after just 16 seconds of the first round in her only loss in the UFC to Germaine de Randamie.

Later on Friday, Ladd herself took to Instagram to explain to fans, revealing that the unfortunate scenes on the scales had come from her starting her menstrual cycle just before her weight cut.

“Fight is off. Again. All my fault,” Ladd wrote.

“Straight up started my period 2 days back and made this cut absolutely miserable. Did the best I could, hit 137, the scale situation was a mess because the last thing I wanted was to bleed in front of the media.

“The fight wasn’t pulled, my opponent then decided she would rather not go through with it, as is her right. I’m going to get slammed regardless, so let it begin.”