Home / WORLD / ‘This is a retaliation case,’ US lawyer who sued Chevron says, after landing six-month sentence despite UN’s call for his release

‘This is a retaliation case,’ US lawyer who sued Chevron says, after landing six-month sentence despite UN’s call for his release 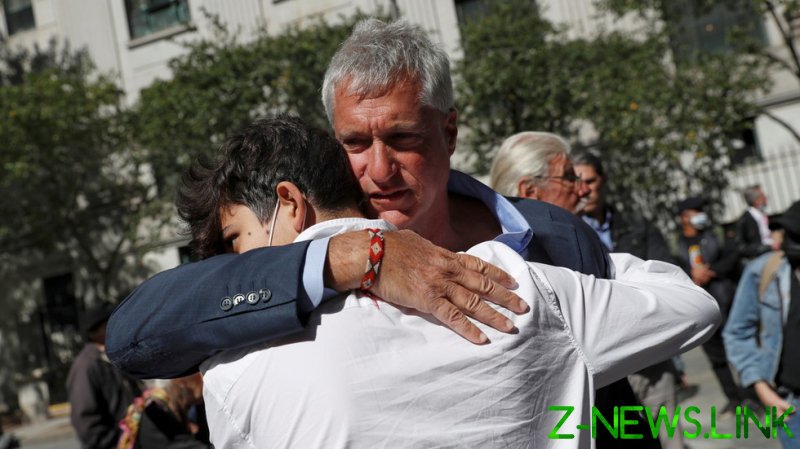 “This is a retaliation case designed to punish me for my successful advocacy on behalf of the indigenous groups in Ecuador,” Donziger said in a video address he uploaded to Twitter in response to Friday’s verdict in the Chevron case.

In the early 1990s, the Harvard Law School graduate and college classmate of former US President Barack Obama sued Texaco, which later became part of Chevron, on behalf of 30,000 Ecuadorian farmers and indigenous people who believed the American oil company’s operations were responsible for water and soil contamination in their country’s Lago Agrio region, as well as for a spike in cancer rates in the area. The proceedings in an Ecuadorian court lasted for years and ended with Donziger winning a $9.5-billion judgment against Chevron in 2011.

The company doesn’t deny the damage done to the ecology by waste pools and slag heaps, but insists the $40 million it invested in clean-up efforts absolved it from liability. Chevron subsequently filed a countersuit in the US, accusing the lawyer of bribery, fraud, and witness-tampering. It claimed Donziger was motivated by greed because he was looking to get his hands on hundreds of millions of dollars in contingency fees from a successful compensation case. The American judge took the side of Chevron in 2014 and refused to enforce the Ecuadorian judgement.

The energy company later tried to recoup the money earned by Donziger in that case, with the contempt charges against him stemming from the lawyer’s refusal to turn his electronic devices over to Chevron’s forensic experts during those proceedings. He denied the request, arguing it would violate client-attorney privileges and provide the energy company with insight into his team’s legal strategy.

Donziger has been under house arrest since August 2019 while awaiting trial and sentencing. This May, US District Judge Loretta Preska found him guilty of “willfully” defying court orders.

Experts from the UN’s Working Group on Arbitrary Detention said earlier this week that they were “appalled” by the way the 60-year-old was being treated by the US justice system and called for him to be set free. Five international jurists on the panel described the detention of the now-disbarred lawyer as “arbitrary,” pointing out that he had “already served the maximum-possible penalty some four times over.”

“Judge Preska completely ignored the ruling of the UN” and came up with a “totally unfair” verdict, Donziger insisted in the video. “She sentenced me to the maximum sentence of six months in prison – that is, on top of my two years and two months of house arrest.”

Contempt is “the lowest-level misdemeanor … a petty offense,” he pointed out, reminding viewers that the harshest sentence previously handed to a lawyer in the US on such charges had been 90 days of home confinement.

Donziger and his legal team are to challenge the six-month prison term, with the lawyer claiming the fact the judge denied him bail pending the appeal was another sign of the “punitive nature” of the whole process. Her decision was “almost unheard of,” considering it was a misdemeanor case, he added.

“I have a really good appeal. I think, ultimately, I’ll be exonerated. But that appeal takes one to two years. It’s very clear Judge Preska wants me to serve my six-month sentence immediately, so that, even if I get exonerated on appeal, I still would’ve served a sentence for a crime that I never committed.”

A huge crowd of supporters gathered outside the court in New York before the sentence was announced on Friday. Donziger said the rally was “phenomenal” and expressed confidence that the unjust verdict would attract even more attention to his case.

Earlier this year, the lawyer told RT he believed the true aim of the prosecutors was to prevent future cases of this kind being filed against major companies such as Chevron.