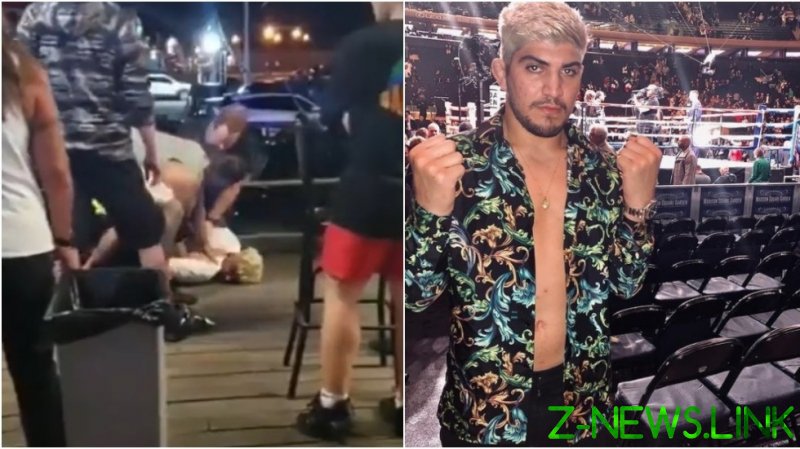 According to a report obtained by MMA Fighting, Danis was charged by police after he “created a disturbance” at the Beachcomber Bar and Grill in Seaside Heights, New Jersey.

A supposed mugshot also appeared online, while a spokesperson for the Seaside Heights court confirmed the charge, with Danis set to return there on October 19 as per a summons.

After posting a defiant “you need people like me” tweet, Conor McGregor training partner Danis became the target of more mockery after more footage purporting to show the incident began to circulate on social media on Wednesday.

In the clip, the Bellator MMA fighter is seen being held to the ground and restrained by what seems to be a security guard, although the police appear in the proximity.

The scenes prompted a fresh round of scorn from some well-known MMA figures, including UFC  welterweight contender Gilbert Burns.

“Holy smoke the [policeman] got him good,” wrote the Brazilian, alongside a crying-with-laughter emoji.

“Lol how funny is this?” goaded former Bellator and UFC fighter Ben Askren.

“Cop has Danis back and applying RNC. It’s no wonder we never see him in the cage.”

Others were equally less kind.

“This dude is down bad,” wrote another onlooker, who shared the footage that has already been seen more than 100,000 times.

But some did leap to the 2-0 Bellator fighter’s defense.

“Or dude is probably blacked out and doesn’t want to go jail for like five years plus for resisting arrest and get a felony assault on officer…,” one theorist concluded.

“That’s what I thought,” began one reply to that.

“I don’t like the guy much, but it’s not like this was a cage fight and he could go all out against a cop.”