Home / WORLD / Thirty years ago, the START-1 nuclear deal made the world a safer place: Now, the US & Russia risk returning to an atomic standoff 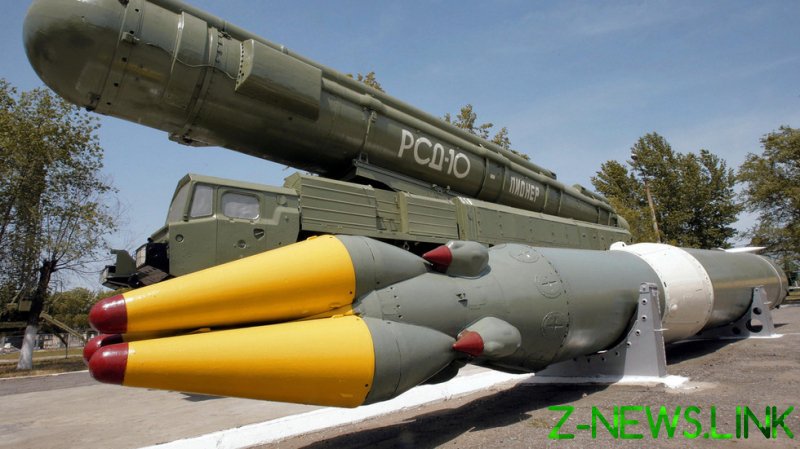 When it entered into effect three years later, there was no USSR left. Nevertheless, its ambitious terms sought to draw a line under the steady increases in long-range nuclear weapons that had characterized the Cold War. Even more importantly, the pact actually reduced their numbers significantly, as cooler heads prevailed after the tumultuous years from 1979 to 1983, when the world seemed to tumble toward World War Three.

START I was not only ambitious, but also fully implemented within one decade, long before its official expiration in 2009. No mean feat, if you consider that one of the two contracting parties ceased to exist a few months after the signing of the treaty, leaving its commitments to be taken up by the new state of Russia.

Before START I, the USA and the Soviet Union had about 11,000 nuclear warheads each. The agreement reduced that figure to just under 8,000. Put differently, a total of about 6,000 warheads had to go, a complicated and expensive task. Additional restrictions included tough transparency and verification measures that, in practice, could only be carried out with a great deal of cooperation. Duly updated, these verification principles have continued to provide a basis for disarmament negotiations and agreements.

In 1987, the same politics of unprecedented cooperation that produced START I also brought about the agreement on Intermediate-Range Ballistic Missiles, widely known as the INF Treaty. Like START I, it led to a great reduction in existing nuclear arms, by a total of almost 2,700 weapons. Also like the later pact, it was trailblazing in the area of verification and inspections.

In addition, the INF Treaty was the first disarmament agreement to not merely reduce but abolish a whole class of weapons, in essence, every missile with a range between 500 and 5,500 kilometers, at least if owned by the US or the Soviet Union. Getting rid of these weapons was of special importance because of their destabilizing capacity of striking with very little warning time.

A good argument can be made that it was the INF Treaty that really marked the end of the Cold War, or at least the beginning of its end.

There is something else that is conspicuous in retrospect, against the backdrop of contemporary American political  reluctance to consider anything but intervention by war and regime change: While very much a common Soviet-American achievement, START I went back to an American suggestion, made by no one else but hyper-conservative Cold War super-hawk, President Ronald Reagan. Its predecessors, SALT I and II can also be traced to an American president’s initiative, in this case Lyndon B. Johnson, although they came into being under his successors, Democrats and Republicans. The final shape of the INF Treaty as well reflected an idea originally raised by the US in 1981.

In sum, there was a time, when American governments, of both parties, were capable of formulating and, if they found responsive partners, pursuing far-ranging disarmament goals. They were not altruistic, not at all. Ultimately, the deals greatly benefited the USA, in hardheaded, realist terms.

But these agreements were also useful to the Soviet Union, and to its successor states. A number of them gave up all their nuclear weapons. And, most importantly, they were, as we say now, a “win” for everyone else on the planet as well.

Of course, neither the INF Treaty nor START I were cure-alls. They did not abolish atomic bombs, but merely significantly reduced their numbers in the two largest (by far) arsenals in the world. Even after these treaties, the US and Russia have always retained enough firepower to put a very real – rudely un-Fukuyama-ish – end to history.

And then there are the other seven (by now) nuclear-armed countries, the smallholders of the key to atomic doomsday, including regimes that habitually abuse human rights and break international law, such as North Korea and Israel.

According to the Stockholm International Peace Research Institute (SIPRI), between all of them, the current nine nuclear powers of the world still sit on a total of just over 13,000 warheads. Almost 4,000 of these weapons are currently deployed (not just kept in some form of storage), with about 2,000 of them – belonging mostly to the USA and Russia – routinely at a high state of readiness.

While our popular culture may not focus on the threat of nuclear Armageddon in the same manner as that of the Cold War, with haunting films such as the American “The Day After” or the Soviet “Letters from a Dead Man,” despite some real progress, everything that could make it happen is still in place.

While no magic wand, START was not only a success but also, unlike the INF Treaty, started a lasting process. Even when the first START agreement was concluded, both sides already agreed that it was not enough. Yet, at first, attempts at further substantial cuts with a START II agreement, principally agreed-on in 1992/93, failed. The final nail in its coffin was the American withdrawal from the Antiballistic Missile (ABM) Treaty in 2002, an early key achievement of the 1970s that Russia has considered essential – a fact that Washington has chosen to disregard.

Fortunately, since then, further efforts have been partially successful. After START III and the Strategic Offensive Reductions Treaty (SORT), the New START agreement entered into force a decade ago. It has recently been extended until 2026. As of now, both the USA and Russia are maintaining their deployed nuclear forces at levels within its limits, i.e., far below the levels reached by START I, even if New START does not set limits to their overall arsenals.

START I and its successors show what reason, patience, and a modest amount of goodwill can achieve even among parties who have a hard time seeing each other as partners instead of opponents. Yet, unfortunately, that is far from the whole story. On the contrary, here has also been a strong countervailing tendency toward more tension and confrontation. In fact, at this point, the “overall number of warheads in global military stockpiles … appears to be increasing” and “the declining trend that has characterized global nuclear arsenals since the end” of the Cold War seems to be stalling, according to SIPRI.

Between the US and Russia, the ABM Treaty was not the only agreement abandoned. The same has happened to the INF Treaty. In fact, Russia began criticizing it in response first to the American withdrawal from the ABM agreement, and then to the development of US drones as well as missile defense systems, in particular the stationing of components in Europe, which Moscow saw as both generally destabilizing and having offensive launch capacities. Later, alleging that Russia had deployed a missile that was in breach of INF Treaty rules – an allegation which Moscow has rejected – two years ago the USA formally gave up on this core piece of European and global security.

Russia, meanwhile, has officially suspended the agreement. Ironically, while Washington started complaining about Russian INF Treaty compliance under president Obama, it was Donald Trump who finally escalated the stand-off and pulled the plug on the deal. Once more, the “Russiagate” fantasy of his doing Moscow’s bidding had no bearing on the reality of his actions.

The death of the INF Treaty was a long, complicated agony, a story of distrust, bad faith, complex technical details, and obstinacy. What is clear is that this was an avoidable death. It would have been possible to construct a compromise, if need be a complex one, and save the treaty as such.

And that might be the most depressing point, when we think about the future: the INF Treaty’s demise signals the real possibility of both the US and Russia returning to a full, essentially unrestrained arms race, with all its horrendous waste, risks, and potential worst-case outcomes. Of course, in a world with, unlike the Cold War, plenty of potentially devastating cyber weapons also in play (and no international cyber agreement that deserves the name), such a scenario would be even more dangerous.

If that’s not grim enough, just add the fact that the rise of additional nuclear powers has, inevitably, complicated the American-Russian situation as well. One Russian concern over the INF Treaty, for instance, was that it does not cover China, a burgeoning atomic power.

Like the end of the Cold War in general, START I could have signaled the beginning of a long “happily-ever-after,” but that is not what has happened. So much is clear already. The question is: What comes next? Fortunately, START’s descendants are still alive, but there is absolutely no guarantee that they will be in the future. With a fresh attempt at “strategic dialogue” opening now between what are still the two leading nuclear powers, let’s hope that START’s lesson of reason and patience will be remembered.