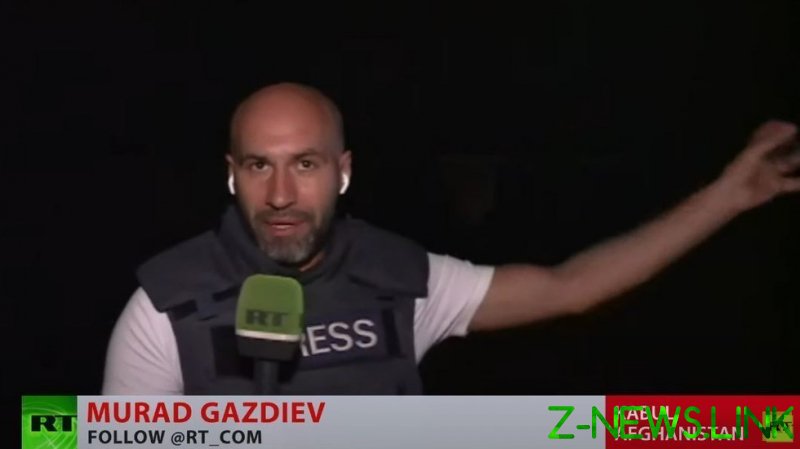 The blast went off as local authorities, Taliban and coalition forces were still attempting to figure out what had happened during the earlier explosions. A suicide bomber reportedly detonated himself by one of the gates of Hamid Karzai International Airport and a second blast believed to be a vehicle bomb went off near a hotel used by western forces to process refugees, kicking an already chaotic scene into even higher gear.

The total number of victims is yet to be confirmed, with local health officials telling reporters that at least 60 died in Thursday’s blasts, while the Taliban initially said that 13 were killed outside the airport.

A Taliban spokesperson told NATO officials earlier on Thursday that the massing of people at the airport might tempt a bad actor trying to hurt the Islamic fundamentalist group’s “reputation” – deeming the threat level “low and unspecific” but nevertheless present.

RT’s Murad Gadziev confirmed that the ultra-crowded airport as “a target that many terrorists won’t be able to walk by,” calling the press of bodies “indescribable.”

His sources cited the crowds as the primary cause of death despite the massive explosions, explaining “many of the people who died today died not from shrapnel wounds or direct damage from the bomb blast but from the stampede.”

American officials have maintained that the threat of terror attacks at the airport remains high, though evacuation flights are apparently continuing. Thousands of Americans as well as Afghans who worked with coalition forces against the Taliban are desperate to get on planes to the US, and a dwindling number of European countries including the UK and France are also still attempting to fly their citizens out.