‘They’re trying to kill Assange because he spoke the truth’: Roger Waters calls on Biden to end ‘disgusting’ sham prosecution 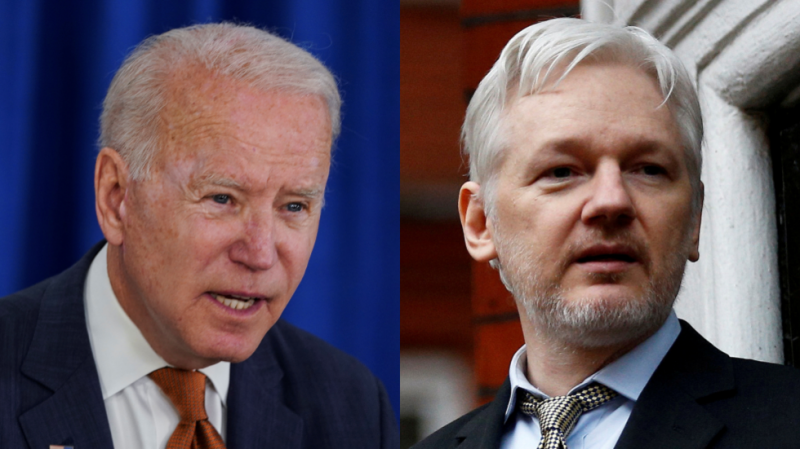 Assange’s father John Shipton and brother Gabriel are traveling across the US this month to press the Biden administration to drop its charges, and highlight the threat to worldwide press freedom this prosecution poses. Joining them in New York this week was Roger Waters, who told RT on Friday why he’s fighting for Assange.

“He is being held up as an example: keep your mouth shut or this will happen to you,” he said.

They’re trying to kill Julian Assange because he spoke the truth, and it’s disgusting.

After seven years holed up in London’s Ecuadorian embassy, a change in power in the Latin American country saw British police officers allowed inside to arrest the WikiLeaks founder in 2019. He has languished in Belmarsh Prison since then, denied bail, even though a judge ruled in January that he could not be extradited to the United States due to concerns over US prison conditions.

On the day he was arrested, the US unsealed the Espionage Act indictment against Assange, secretly filed in March 2018 by the Trump administration’s Justice Department. Though Joe Biden is now in the White House, the US government is still seeking his extradition, and Waters called on Biden to stand by the Obama-era decision not to prosecute the WikiLeaks founder.

“It’s interesting that this Democratic president has not yet gone back to the Obama administration’s contention that there was no case…and that you cannot prosecute Julian Assange, because if you do, then you have to prosecute every publisher who publishes any truth that you might find inconvenient,” he said.

The espionage charges against Assange do not allege that he stole or leaked classified documents, only that he published them. Such charges have never been tested in court before, and Assange’s legal team argue that what he did was no different than what the newspapers who ran the same stories about alleged US war crimes in Iraq and Afghanistan did.

Waters agrees. “We know for sure that he committed no crime,” he told RT. “All he did was report the news.”

If that’s a crime then we should lock up the editorial boards of the New York Times and everyone else…the whole thing is a complete sham.

Waters called on Biden and his administration to drop the charges, which could see Assange face 175 years behind bars if extradited and convicted. “The question [the administration is] being asked to make a judgment about is as clear as day,” he told RT. “He certainly hasn’t committed espionage, or any crime that could be prosecuted in the United States.”

With Biden and his team apparently content to ignore the Assange case for now, Assange’s fiancee Stella Moris, Geneva Mayor Frederique Perler, and UN Special Rapporteur on Torture Nils Melzer joined the chorus calling for the journalist’s release last week, with Melzer calling Assange’s incarceration “one of the biggest judicial scandals in history.”