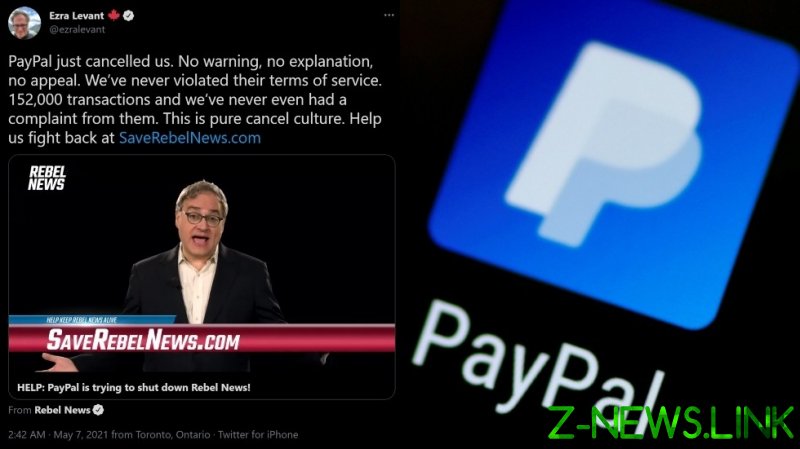 “Look, this isn’t a mistake. It’s a cancel culture attack on the largest independent news agency in Canada. It’s censorship,” Levant announced on Thursday, in a fundraising appeal for legal fees to sue PayPal.

According to Levant, PayPal sent a “form letter” by email last Friday after business hours, informing the outlet that their account – which processed over 150,000 transactions for 8 million Canadian dollars over the past six years – was canceled. The email had no signature, contact information, explanation or way to appeal, Levant said.

“We’re a big client. But with no notice at all, they just breached the contract. They ambushed us,” he wrote. Levant maintains Rebel News never breached PayPal’s terms of service, and that the company has simply ignored multiple letters from his lawyers.

Levant argues this is a coordinated effort, pointing to the fact that Google-owned YouTube handed Rebel News a week-long suspension before PayPal made its move. Moreover, in addition to the Rebel News account, PayPal shuttered Levant’s personal account, as well as that of the For Canada nonprofit, used to fundraise for charity projects.

“That’s why I don’t think this is a mistake. They’re trying to destroy us. And they don’t have the courage to even tell us to our face,” said Levant, who co-founded the outlet in 2015.

While identifying as conservative, Rebel News has been critical of both the Liberal Trudeau government and the conservative provincial leaders such as Jason Kenney in Alberta and Francois Legault in Quebec.

Levant even speculated that PayPal’s action may have been related to the recent Rebel News revelation that Trudeau had funded the Anti-Hate Network – an offshoot of the US-based SPLC – to “lodge malicious complaints against Trudeau’s enemies.”

He says Rebel News has lost about a million dollars as a result of the PayPal and YouTube actions, and wants to raise $150,000 to sue.

While PayPal is yet to comment on the matter, denial of service by banks and payment processors has been a popular way of shutting down unpopular outlets and online platforms over the past several years. Back in March, Gab CEO Andrew Torba revealed that several banks have refused to do business with his company citing bad coverage in the corporate press, urging like-minded Americans to “cancel them all before they cancel us.”