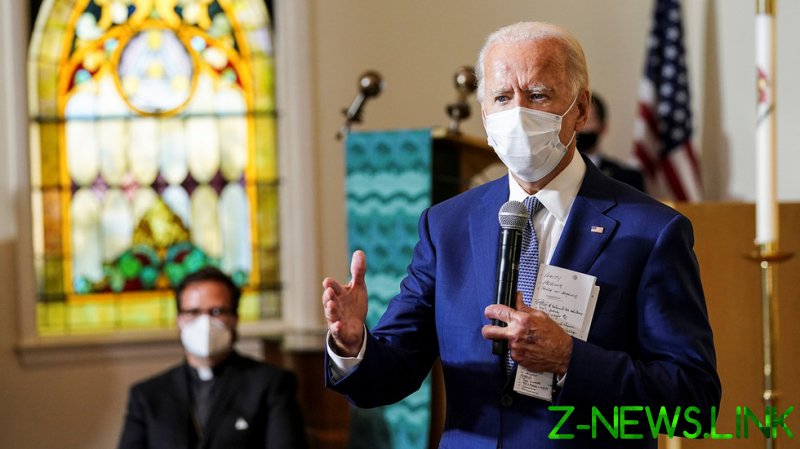 Long before he hit the 2020 campaign trail, Biden had a reputation as a gaffe machine. His latest clanger, though, left pundits groaning.

Speaking at a community meeting in Kenosha on Thursday, Biden explained his tax plan to voters, promising not to raise rates for low- and middle-income Americans and vowing to slap the country’s biggest corporations with tax hikes. Wrapping up his spiel on corporate tax, Biden quipped “I’m not gonna lay it out for you. I won’t now because they’ll shoot me.”

Commentators on Twitter were quick to vent their ire and disbelief at the remark. Biden was lambasted for his choice of words, delivered in a city torn apart by riots that kicked off when police shot a suspect seven times in the back last month.

Biden traveled to Kenosha on Thursday, following in the footsteps of President Donald Trump, who toured the Wisconsin city two days earlier to push his “law and order” message. Biden’s campaign billed the Democrat’s trip as a chance to “bring together Americans to heal and address the challenges we face.”

Ill-advised jokes weren’t the only snafus the former vice-president’s trip generated though. When an audience member took the stand to question the Democrat, she opened her statement by saying that she’d be going off a “script” she held in her hand. The soundbite fueled speculation that Biden’s team vetted audience members before the questions-and-answers session, and only approved pre-scripted questions.

One day earlier, Trump jeered at Biden for accidentally reading script notes aloud from a teleprompter during a one-on-one interview with a Florida TV station. “Can you believe what’s happening!?” Trump tweeted. “They give Joe Hiden’ the questions, and he reads them an answer!”