Home / WORLD / ‘They won’t ask questions on point’: Biden tells PM Modi not to answer to US press that ‘behaves’ worse than Indian media 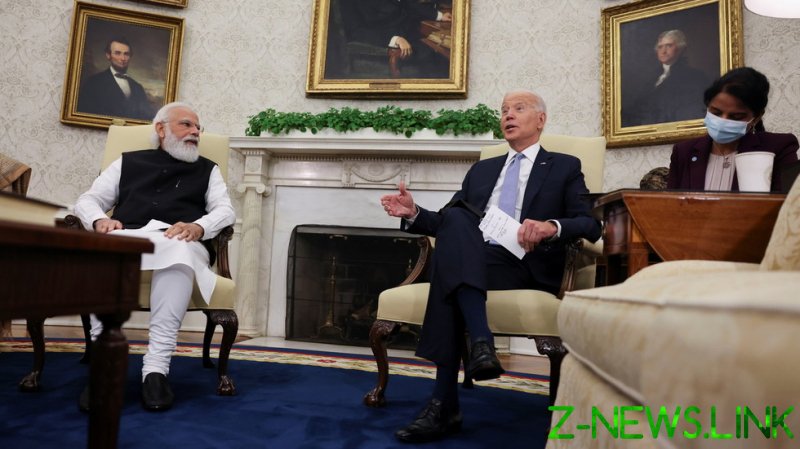 “I think what we’re going to do is bring in the press,” the US president said as he sat with Modi ahead of formal talks in the Oval Office on Friday.

“The Indian press is much better behaved than the American press,” he warned his guest before journalists entered the room, according to a video from the meeting.

“I think, with your permission,” Biden told the Indian prime minister, “you could not answer questions because they won’t ask any questions on point.” The Indian PM reportedly agreed with his host.

Despite their absence from the official transcript of the talks, those remarks were widely shared by social media users, including some of the White House correspondents themselves.

“I thought Modi had said this when I heard about it, but nope that’s the American president,” Katie Rogers, a White House reporter for the New York Times, wrote on Twitter.

Her colleague, Christian Datoc of the DC Examiner, pointed out that the comments by Biden sounded “pretty Trumpian.”

Biden has praised the value of journalism on many occasions during his campaign for the White House as the media kept trashing his rival Donald Trump. But things changed after he became president and was himself faced with inconvenient questions and criticism.

Earlier this week, the US leader refused to talk to the US media after his meeting with British Prime Minister Boris Johnson. Reporters shouted questions about the southern border crisis and US border guards using whips against Haitian migrants, but apparently they weren’t on point.

In July, Biden labeled NBC News reporter Kelly O’Donnell a “pain in the neck” for approaching him about a vaccine mandate at the Veteran Affairs Department.

He told CNN’s Kaitlan Collins that she was “in the wrong business” as she kept grilling him over his summit with Russia’s President Vladimir Putin, but later apologized.

Biden also jokingly threatened to run a reporter over after being asked to answer a question about Israel during a test-drive of a Ford electric car.