Home / WORLD / ‘They were trying to do a coup!’: Trump says after FBI docs reveal agents bought liability insurance during Flynn probe 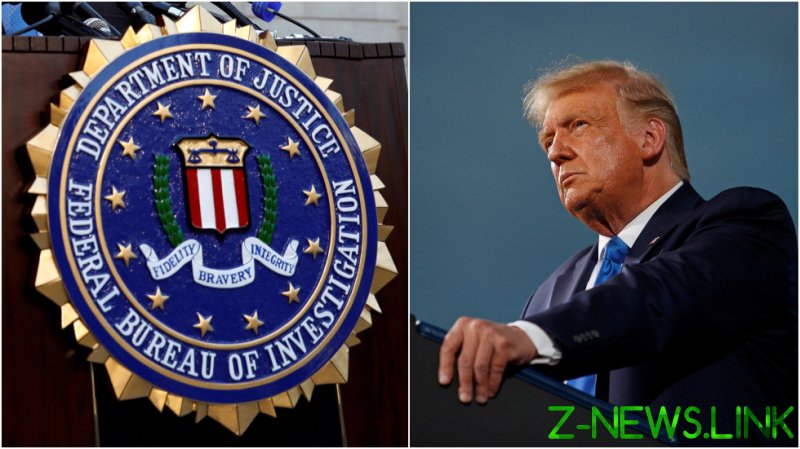 The new documents were disclosed in a federal court filing on Thursday by Sidney Powell, defense attorney for former Trump adviser Michael Flynn. Seizing on the new release, the president ran a victory lap at a campaign rally in Florida, telling the crowd the FBI had been “caught” attempting a “coup.”

“Today a trove of text messages was released from FBI agents involved in the Russian witch hunt. You gotta see this,” Trump said, reading out a headline from the Federalist.

“These people are scum. They were trying to do a coup. And we’ve caught them before that, we caught them spying on our nation… Never forget: they are coming after me because I’m fighting for you.”

The documents, which largely consist of text messages between unnamed federal agents, reveal that both FBI and CIA personnel purchased professional liability insurance days before Trump took office, fearing that illicit media leaks at the Department of Justice could result in lawsuits against many involved in the first leg of the Trump-Russia investigation – then known by its FBI codename, “Crossfire Hurricane.”

“We all went and purchased professional liability insurance,” one agent said in a text on January 10, 2017, some 10 days before Trump’s inauguration.

“Holy crap. All the analysts too?” another agent said, prompting the first to reply “Yep. All the folks at the Agency as well” – an apparent reference to the CIA.

When the first agent was asked who might be filing lawsuits, he responded: “Haha, who knows… I think [the] concern when we got it was that there was a big leak at DOJ and the [New York Times] among others was going to do a piece.”

The messages also indicate that the FBI’s separate investigation into Michael Flynn, then Trump’s national security advisor, was kept alive long after senior figures in the bureau ordered the probe closed, finding no “derogatory information” on Flynn. While one agent expressed relief in early November 2016 that the Flynn probe – named “Crossfire Razor” – was ordered shut, that order had been overturned by January 2017, bureau personnel said in the messages.

Other texts show agents discussing the use of National Security Letters (NSLs) as a pretext to ‘buy time’ and drag out the investigation, allowing the FBI to continue digging into Flynn’s finances with little judicial oversight, despite prior “traces” turning up “nothing.”

Flynn was forced to resign as national security advisor in 2017 and later charged for misleading the FBI about his contacts with Russian Ambassador Sergey Kislyak, with whom he was accused of discussing US sanctions on Russia prior to Trump’s swearing-in as president. The DOJ has since ordered Flynn’s case closed after prior document dumps revealed misconduct at the bureau, Flynn’s judge has refused to comply with the order.

Among other revelations, the new messages also show that some agents believed FBI officials running the Trump-Russia investigation were biased in favor of then-Democratic candidate Hillary Clinton, even hoping she would win the 2016 race.

“Doing all this election research – I think some of these guys want a Clinton presidency,” the agent said, prompting another to respond that “they seem to respect that they know what they are gonna get.”

“Haha, really. Instead of a wild card like Trump,” the first agent said.

The FBI documents were not the only blockbuster publication on Thursday. A new DOJ memo made public by Senator Lindsey Graham (R-South Carolina) suggests the FBI was aware that a primary source for Christopher Steele – a former British intelligence operative hired by the Clinton team to compile dirt on Trump in an infamous “dossier” – was the subject of a counter-intelligence investigation in 2009. Despite deeming the source a potential Russian spy, the bureau relied on Steele’s dossier to obtain warrants to spy on the Trump campaign, disregarding the questionable origins of his so-called intelligence.